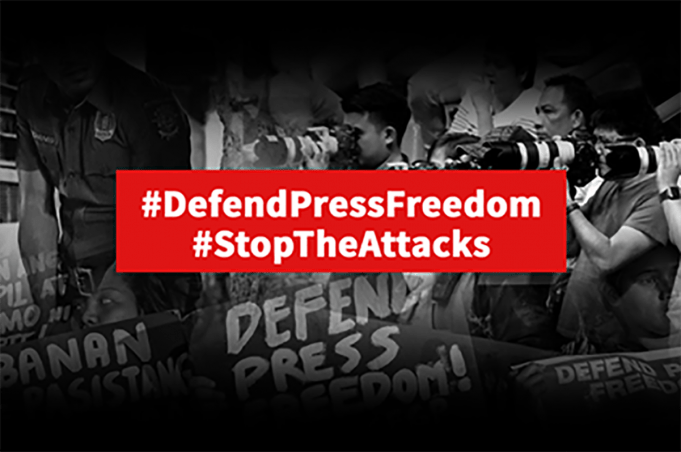 Northern Dispatch (Nordis) fears for the safety of our Ilocos correspondent Paola Espiritu. The escalating red-tagging and harassment against her are alarming. The most recent of which is a social media post tagging her as a communist associating her name to an alias “Michelle”. The post, shared by troll accounts operated by suspected state agents, contains her photo.

Espiritu has an exemplary record as a writer and defender of a free press. She started as a student journalist and became one of the respected leaders of the College Editors Guild of the Philippines – Ilocos. She also wrote for the now-defunct Ilocandia Probe. Her passion to amplify the voices of the marginalized through community-based reporting led her to co-organized the reestablishment of Tignayan Production, an alternative multi-media group in the Ilocos. When Nordis started, she was part of the student group who contributed stories and regional updates for the paper. Her valuable service to Nordis continues to date.

We strongly believe that this recent threat against her safety and wellbeing is the handy work of the 81st Infantry Battalion and its attached Civil-Military Operations Unit under Capt. Regelio Dumbrique, Jr., who has been hell-bent in associating our colleague with the communist rebels.

Since 2018, soldiers from the said units have been maligning Espiritu, who has been covering peasant and human rights issues and events in the region. We strongly attribute this attack to 81st IB and its CMO personnel, who, on June 6, 2017, tagged the Ilocos People’s Center in Candon City as a safe house of NPA recruiters. The said building is where our colleagues use to stay, including Espiritu, when they are in Ilocos for coverage.

We see no other suspect for this cowardly act, but the 81st IB and CMO unit led by Dumbrique, especially when previous instances of red-tagging and harassment of Espiritu are taken into account. Here are some of the recorded malicious labeling and vilification against her:

Even before the three incidents, state forces have already set their crosshairs on Espiritu. During the First Quarter Meet of the Ilocos Regional Peace and Order Council in 2019, the military tagged her as “Threat to Region 1” in their presentation. In addition, during her coverage of the August 9, 2019 dialogue between the soldiers and people’s organizations, Dumbrique called her attention for no apparent reasons.

Espiritu retorted that she does not know him and has no business calling her by her first name. She also made it clear to Dumbrique that the incident made her uneasy and scared.

The unrelenting attack against her has taken its toll on her emotional state and made her seek refuge. It has brought fear and misery to her family and friends. This also creates a chilling effect among journalists, especially those in the alternative and community media.

This pattern of branding journalists and alternative media outfits critical to the government as communist rebels or sympathizers of the underground movement is a cause for concern and fear. It has become a hallmark for more dangerous things to come from trumped-up charges to extrajudicial killing.

Stop the red-tagging and harassment of Paola Espiritu!
Stop the attack against the media and the people’s right to know.