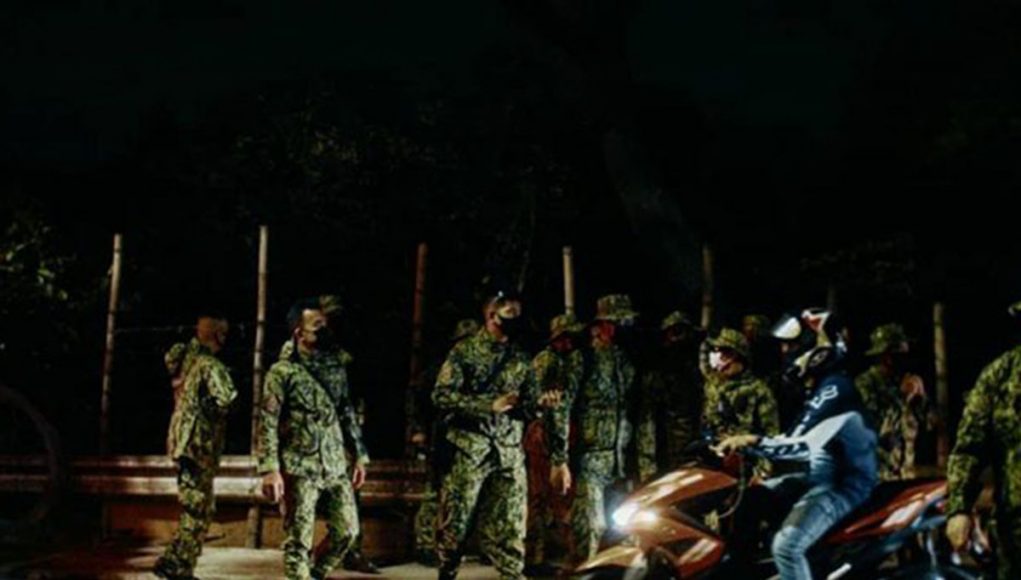 MANILA – A group of peoples’ lawyers issued an advisory, March 19, reminding state security forces to respect the constitutional rights of citizens in the implementation of Luzon-wide enhanced community quarantine.

The National Union of Peoples’ Lawyers (NUPL) said the 1987 Philippine Constitution remains valid even with the declaration of Luzon-wide quarantine and therefore, civil, political, social, economic and cultural rights must be respected and protected.

“Civilian authority should be supreme,” the group said.

President Rodrigo Duterte warned those who would violate the rules of the community quarantine of arrest. “From a simple violation of a rule, it will now ripen into a crime that is punishable by law and you can go to prison. That’s the problem. Ayaw ko. Ayaw ko. Ayaw ko na masita kayo ng military pati pulis. But ako sa inyo, if you are advised, just obey,” he said.

The NUPL reminded authorities that arrest without warrant is not allowed, except and only in the following instances: when one is caught in the act of committing or attempting to commit a crime; during a hot pursuit, or when a crime has just been committed and the police or law enforcement officer has probable cause to believe based on personal knowledge that one has committed such crime; and, if one is a prisoner or person deprived of liberty who escaped prison.

The advisory came a few days after the arrest of a homeless old woman in Malate, Manila. According to a report, Dorothy Espejo, 69, was arrested by Manila police on March 16 after she allegedly shouted expletives at barangay officials roving the area. She was charged with prohibiting resistance and disobedience to authority.

Asked for reaction on the arrest of Espejo, Edre Olalia, NUPL national president, said, “Heartless. This is what we get when arrogant national leaders and high and mighty public officials are obsessed with ‘law and order’ rather than justice and humanity. It also validates the knee-jerk anti-poor approach and elitist bias to the serious problem.”

Two days ago, a cameraman of CLTV36, Pampanga-based TV station, was threatened by a police officer manning the checkpoint in Jose Abad Santos Avenue in San Fernando, according to the National Union of Journalists of the Philippines (NUJP). The said policeman barred cameraman Art Consuelo from shooting video footages at the checkpoint. Consuelo, who continued rolling his camera, was told by the uniformed personnel that he will be sued. After discussions with the policeman’s unit head, Consuelo was then allowed to continue his job.

The NUPL reminded citizens of their Miranda rights. These include the right to be informed of the right to remain silent, the right to have competent and independent counsel, the right not to be subjected to torture, force, violence, threat or intimidation. Secret detention places and being held incommunicado are prohibited.

Arrested persons, the NUPL added, have the right to be visited by their lawyers, immediate family members, any medical doctor, priest or religious minister, any non-government organization accredited by the Commission on Human Rights, and any international NGO accredited by the Office of the President.

The NUPL said that the national health emergency does not suspend the maximum period of detention without charges. The Revised Penal Code states that persons arrested without warrants should be charged within 12, 18 or 36 hours depending on the penalty. If no charge is made beyond the said periods, the detention becomes illegal and the arrested person should be released.

State security forces violating the rights of detainees, the NUPL said, may be charged with civil, criminal and administrative charges, and violation of Republic Act 7438 or An Act Defining Certain Rights of Persons Arrested, Detained or under Custodial Investigation.

The NUPL added, “Checkpoints under the present extraordinary circumstances must primarily be for health, medical and public welfare reasons and must at all times respect the dignityand rights of a person.”

The group said inspection of vehicles should remain visual, production of required documents routinary, and frisking of individuals must still be based on probable cause.

The so-called “quarantine passes” and masterlists issued by barangays or villages may be concededly permissible but it should be regulatory and not punitive, the NUPL said. No one should be arrested or detained for its misuse or non-compliance, unless there is a valid law, city ordinance or provincial board resolution penalizing such act or omission, it added.

“Also, such quarantine passes and masterlists for the specific purpose of accessing basic necessities, food and essential health services must be voluntary, reasonable, necessary and practical. They must not impose unnecessary requirements, require any other information, or be used for any other purpose,” the group said.

That NUPL said that only those who willfully disobeyed lawful orders of law enforces may be arrested and charged with resistance or disobedience to law enforcers. If violence or serious intimidation is employed to resist or disobey persons in authority, the crime is direct assault.

The conduct of inquest proceedings for arrests without warrants shall continue but all preliminary investigation hearings during the quarantine period are cancelled and shall be rescheduled after the lifting of the quarantine.

While Sec. 9 of Republic Act 1132 states that non-cooperation of the person or entities having the notifiable disease, or affected public health event such as COVID-19 is a prohibited act, the NUPL maintained that the crime of “non-cooperation” is not sufficiently defined in the law.

“The penal provision is so vague that it is open to interpretation and may give way to abuse by law enforcement authorities. It is open to legal challenge,” the group said.

The group believes that the prohibited act should be limited to non-disclosure of a notifiable disease by an infected person, or by any person having knowledge thereof. The provision cannot be used for violation of regular quarantine rules, the group said.

Human rights lawyer Chel Diokno, in a series of tweets, also reminded the public of their rights.