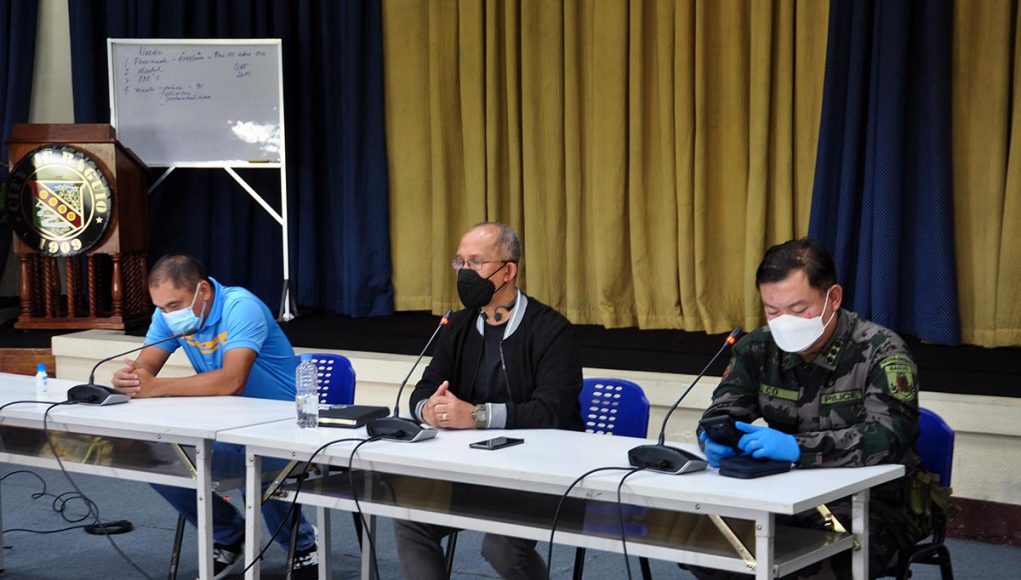 BAGUIO CITY — The local chief executive of this city urged health authorities to be “more aggressive” in tracking individuals who came in contact with suspected Coronavirus disease 2019 (COVID-19) patients.

Mayor Benjamin Magalong said during a press conference on March 20 that contract tracing procedure should start the moment doctors identify high probability patients for the COVID-19.

“If they think is a highly probable case, then they should raise the red flag, then let us conduct contact tracing,” he said in mixed English and Filpino.

According to him, there are four highly probable cases of COVID-19 infection among those categorized as persons under investigation (PUIs). There is also one death, which is likely caused by the disease.

Magalong said medical personnel handled the remains of the patient based on the COVID-19 protocol. However, reiterated that the Department of Health-Cordillera Administrative Region (DOH-CAR) had not announced any confirmed case in the city.

“It is right that they have s system and I am not very particular about their announcement. It is just that don’t favor that we wait for the confirmatory test before conducting the contract tracing. To be honest with you, I don’t agree with that,” he said.

The mayor stressed that the confirmatory test would take at least eight days. Without immediate action, the probability that others get infected increases during that period.

According to the mayor, SM Foundation committed to donating four test kits. Each kit can test 250 persons. He added that the equipment would arrive next week.

On March 19, DOH-CAR confirmed the arrival of 100 test kits for the entire region. They are now under the custody and use of Baguio General Hospital and Medical Center, which the DOH identified as a secondary testing center.

Magalong said ensuring the unhampered flow of food supplies will be crucial in the following weeks. He said the local government has already arranged the deployment of rolling stores for the barangays. The city will cluster the 128 barangays into 12 districts with 5 to 8 barangays per zone.

Councilor Michael Lawana said they are already undertaking the inspection of the proposed areas for the rolling stores. He added that talks with product distributors are also ongoing. He explained that the measure is part of their function to ensure that residents will stay in their barangays.

The mayor also said the city is going to buy the products of local farmers. Food packs, to be distributed by the city, will include the vegetables. He said they would prioritize the most vulnerable families affected by the lockdown.

With the implementation of the enhanced community quarantine covering the entire Luzon, many Benguet farmers opted to sell their produce at a meager price, with some even giving it free.

Magalong said the city is distributing around 1000 food packs a day coming from the Department of Social Welfare and Development.

“We will distribute more, aside from the 1000 food packs from DSWD,” explained the mayor.

The food pack is enough for three days for a family with five members.

Meanwhile, Lawana, who heads the city’s League of Barangays, said they would also provide limited relief packs. He explained that barangay funds are not sufficient to sustain the needs of their constituents. According to him, the city has already committed support. Still, he is also hoping that the national government can also assist.

Magalong said Baguio City is now on lockdown. However, he clarified that it would be difficult to impose a total lockdown, which means nobody can move in and out of the city. He explained that there are exceptional cases and emergencies that authorities should consider.

According to him, there is no need to escalate the situation. He opted to order the police to ensure stricter implementation of the guidelines. Among those he identified is the mandatory wearing of mask outside the residence and travel permit that will include private vehicles.

“If you do not have any valid reason to come to Baguio, don’t, please stay home,” Magalong said.

Baguio City Police Chief Col. Allen Rey Co said two-thirds of the Baguio police force is deployed all over the city at all times. He added that the remaining one third is resting and on stand by.

The police chief also clarified the information going around about the threat of attacks on grocery stores. According to him, these are unverified information. He also assured the public that they are guarding all vital installations.

Meanwhile, Lawana said that they already resolved the issue regarding the selling of travel permits by some barangays. According to him, the issue cropped-up during the first day of the implementation of the ECQ. He said they already called the attention of the three barangays who collected fees and resolved the matter. The mayor gave the officials involved stern warning and ordered them to return the money.

Different groups and institutions are also responding to the specific needs of some sectors.

The University of the Philippines Baguio has been distributing food and health kits for its stranded students since March 19. UPB Chancellor, Dr. Raymundo Rovillos, earlier instructed university officials to assess the current situation of the students and to provide finance to purchase supplies and goods.

According to the survey conducted by the UPB Student Council, there are 191 stranded students as of March 18, with 80 of them do not have sufficient supplies for the month-long quarantine.

The DASIG Student Party of Saint Louis University also surveyed for the same purpose. Volunteers from the group are still consolidating the number of students and the needs for appropriate measures.

Meanwhile, health professionals, members of the academe, and student groups relaunched the Health for the People Brigade (H4PB) Metro Baguio. The network aims to assert people’s right to health amid the growing concerns over the spread of COVID-19 in the country.

Members of the network urged residents to refrain from sharing unverified information to avoid confusion and unnecessary distress. They also called for donations of Personal Protective Equipment, mainly surgical or N95 masks, for frontline responders.

The network encouraged citizens to report their concerns and recommendations to improve and make the implementation of the ECQ in the city responsive to their needs.

The Philippine Nurses Association, Community Health Education, Services, and Training in the Cordillera Region, Tongtongan ti Umili and Tulong Kabataan Network led the relaunching of the H4PB. # nordis.net/ with report from Khim Abalos