President Rodrigo ‘Digong’ Duterte is a traitor, the enabler of the Chinese fifth column in the covert Chinese invasion of the Philippines. He must be stopped NOW!

Fifth column, as defined in Encyclopedia Britannica, is a “clandestine group or faction of subversive agents who attempt to undermine a nation’s solidarity by any means at their disposal. The term is conventionally credited to Emilio Mola Vidal, a Nationalist general during the Spanish Civil War (1936–39). As four of his army columns moved on Madrid, the general referred to his militant supporters within the capital as his “fifth column,” intent on undermining the loyalist government from within.

“A cardinal technique of the fifth column is the infiltration of sympathizers into the entire fabric of the nation under attack and, particularly, into positions of policy decision and national defense. From such key posts, fifth-column activists exploit the fears of a people by spreading rumors and misinformation, as well as by employing the more standard techniques of espionage and sabotage.”

Fact: Digong has repeatedly, with no qualms, stated that he wants the Philippines to be a province of China.

Fact: In spite of our victory in the International Arbitral Tribunal declaring the limitations of the perimeters of China in the Philippine Seas which China refuses to honor, Digong has allowed China to encroach upon islands that are over its perimeters and close to the Philippines. China was able to claim these islands, set up military installations there including airfields. Where traditionally, Filipinos had those sea areas as fishing grounds, they are now forbidden by the Chinese to even get near there. In a tragic ramming of a Chinese vessel upon a Filipino fishing boat, Digong dabbed the event as only a maritime accident. Digong has said that we cannot confront China because he does not want war with the country who could just bomb us and “wala tayong laban”. While other countries in the Far East are standing up to China, Digong crumpled without a bat of an eye.

Fact: Chinese nationals have been entering the Philippines to be employed to the disfavor of Filipinos. Spokesperson Salvador Panelo and close allies of Digong even said it is because Filipinos are lazy and not competent enough to do the jobs for which the Chinese are employed. The top minions of Digong, Senators Renaldo ‘Bato’ dela Rosa and Bong Go, respectively even pushes for making illegal workers legal and make those not civil service qualified to be made qualified. Recently, illegal workers, specially with the Philippine Offshore Gaming Operators (POGO) had been found out to be members of the Peoples’ Liberation Army (PLA) of China.

The entry of Chinese nationals was also facilitated through the “pastillas scheme” where Philippine immigration officials share bribes ranging from Php10,000 to Php200,000 for Chinese nationals to enter the country disregarding due process. Senator Risa Hontiveros also laments the fact that these nationals could be issued Philippines passports, licenses, birth certificates – using names of dead persons to make their stay in the Philippines legal.

Fact: China’s State Grid Corporation has a 40% stake in the National Grid Corporation of the Philippines (NGCP), a private consortium that has operated the country’s power lines since 2009. It is believed that China has control of the grid, even remotely, and could disrupt energy operations in the country at any time.

Fact: The Philippine military had signed a preliminary agreement with Mislatel, a consortium controlled by Philippine tycoon Dennis Uy with the Chinese, to install communications facilities and towers at its camps and installations. This is tantamount to the Chinese having spy satellites within the defense fortresses of the Armed Forces of the Philippines.

Fact: Chinese syndicates had been smuggling cold cash dollars into the country with Philippine military personnel as escorts. It is estimated that Php10.2 Billion had been shuttled in staggered manner since July, 2019. Cashed entry ranged from Php12,000 to Php50,000 per flight.

It is suspected that these cash are being used to sustain the Chinese nationals while spying in the Philippines.

Fact: Using the US barring Senator Bato entry to the US presumably due to his involvement in the imprisonment of Senator Leila De Lima as reason, Digong has terminated the Visiting Forces Agreement (VFA). Spokesperson Panelo also has said that the Mutual Defense Treaty and the Enhanced Defense Cooperation Agreement could soon suffer the same fate as the VFA. We may be naïve that Digong is serious about this and, with a simple agreement, could generate another mutual defense verbiage, the fact us: cancellation of these treaties would open up the Philippines to easier invasion by the Chinese from the outside and from within – The Fifth Column.

Connect all these dots and you can deduce, right or wrong, that a systematic Trojan Horse is being organized by China, courtesy of Digong, for the eventual invasion of the Philippines.

It doesn’t even have to be violent. No shots may even be fired.

The Armed Forces of the Philippines appears to be mum about this. After all they are being handsomely paid by their commander-in-chief.

Fact: Before the Japanese bombed Pearl Harbor to usher World War II in the Pacific, Hawaiian of Japanese descent were receiving phone calls asking them how the weather was and if the USS ships were docked at the Harbor.

These descendants were not even part of a Fifth Column. # nordis.net 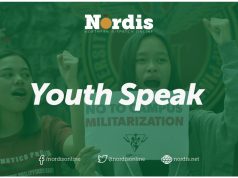