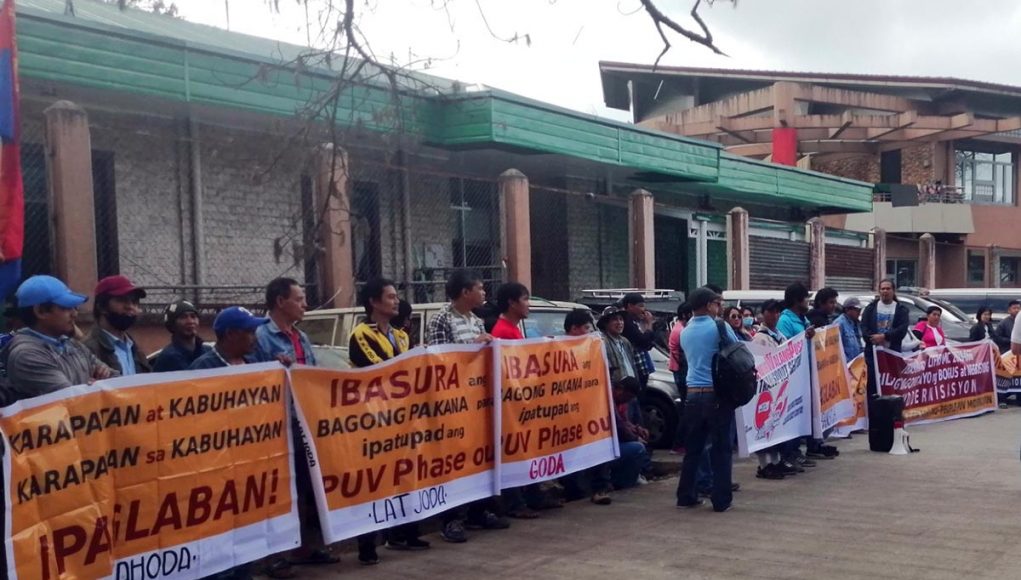 “Saan nga fair ti iyar-aramidda ta apay nga ising-single outda ti PUV. Apay nga saanda iraman dagiti private vehicle? So daytoy ket paset ti panangpressure kadagiti babasit nga operator tapno sumrekda iti PUV modernization (What they did is not fair because they singled-out the PUVs. Why did they not include private vehicles? So this is part of the pressure against small operators to force them to enter the PUV modernization),”Piston Metro Baguio Secretary-General Gerry Diano said.

According to him, there was a lack of due process. He also pointed out that slapping with fines for violating their franchise provisions is without basis.

The transport leader was referring to inspection led by the city mayor that targeted PUV without garages. Mayor Magalong led the monitoring together with the Land Transportation Franchising and Regulatory Board Cordillera Administrative Region ((LTFRB-CAR) and the local police.

The city plans to slap the operators of the vehicles caught parking on the streets with illegal parking charges on the part of the city and franchise violation on the part of the LTFRB. Of the 90 PUV units parked on the road, 67 were public utility jeepneys, and 23 were taxi units.

The inspection is in line with LTFRB Memorandum Circular No. 2017-027, which lays down the implementing guidelines for garages under Department Order No. 2017-011 or the Omnibus Franchising Guidelines (OFG). Specifically, the city cited subsections 2.2.1 to 2.2.9 of the OFG that requires operators of PUVs to provide garages for their units subject to regulations.

LTFRB-CAR Regional Director Lalaine Sobremonte, who also joined the inspection, concurred that the requirement for a common garage only applies to those who are undertaking or have undergone fleet management under the PUV modernization program.

“Yung sa amin, yung common garage ay inire-require kapag consolidated na siya. Although ang sinasabi naming na kung wala pang available na garahe ay pwede naman declaration of undertaking na kapag nakakita na sila they will comply with the garage (We require the common garage if they already consolidated. Although we tell them that if there is no available garage yet, they can file a declaration of undertaking that they will comply with the garage once they find one),” she said.

However, she also defended their inspection, noting that franchise regulations require operators to have a proper garage for their vehicle.

“Ang mga prankisa po kasi ngayon dapat may garahe. Usually, bago mapirmahan ang mga prangkisa ay may mga garahe, kahit yung mga dati pa na nage-extension lang of validity. So may mga ipinakita silang certification mula sa mga barangay na ito ang kanilang garahe (Franchises should have garages. Usually, before signing the franchise, they have to declare their garage, even the old ones who are only extending their validity. So they have to show a certification from the barangay that this is their garage),” she explained.

According to her, the joint inspection stemmed from the mayor’s inquiry on whether PUV operators in the city have their own or rented garage because many still park their vehicles on the streets. She said they are checking the vehicle franchises of those they caught parking on the road during the inspection.

“Page-explainin namin sila bakit sila nagpaparada sa daan eh meron naman silang garahe na nakalagay sa record (We will ask them to explain why are they not parking the vehicles in their declared garage),” she said.

However, Piston President Emeritus George San Mateo, during a protest at the LTFRB Cordillera Regional Office on February 17, said that imposing provisions from the OFG is “premature.”

According to him, it was evident that the purpose was “to terrorize individual operators to consolidate and put up cooperatives and common garage.”

“Yung paggamit ni mayor sa MC 2017-027 ay adelantado. Kumbaga sa tagalog ay nauna pa ang karwahe bago ang kabayo (The mayor’s use of MC 2017-027 is premature. It is like putting the carriage in front of the horse),” he underscored.

He explained that the provision referred to by the city pertains to the requirement of a common garage under the fleet management concept of the PUV modernization program.

“Bakit gagamitin ni mayor ito na basis eh alam naman nila na mayorya ng mga jeep operators sa Baguio ay hindi pa pumapasok sa franchise consolidation, na ang deadline ay sa June 30, 2020 pa? Even after this, may option pa ang mga individual franchise holder na magpatuloy kapag nakapasa sila sa [motor vehicle inspection system] (Why would mayor use this as a basis when he is aware that majority of jeep operators in Baguio have yet to undergo franchise consolidation, and the deadline is still on June 30,20202? Even after this, the individual franchise holders still have the option to continue once they pass the motor vehicle inspection system),” he argued. # nordis.net