Home Sectors Church The Sagrada Familia (Ilocos Sur), one of the first adherents of the...

On February 3-5, 2020, the IFI Obispado Maximo (Central Office & National Cathedral) personnel and staff had launched another Pilgrimage in Metro Manila and in the North (Ilocos Norte, Ilocos Sur, La Union, and Abra) to visit the land marks related to Isabelo de los Reyes, Sr. and First Obispo Maximo Gregorio Aglipay in connection with 118th Anniversary of the founding of Union Obrera Democratica on February 2.

On February 5, 2020, we visited the IFI Parish of Salcedo, Ilocos Sur. As we travelled going to Salcedo, we dropped by at Brgy. Mabayag of Galimuyod town where an IFI Satellite Church is located. Interestingly, next to this, barangay is Brgy. Kilang or Bantay Kilang, the place of the IFI members, Sagrada Familia in Ilocos Sur.

The historical background of Sagrada Familia was written by a former IFI priest, Fr. Rogelio Marero, who was assigned in the Parish of Salcedo and now, he transferred to the United Methodist Church. The title of the article is “Understanding Towards the Membership Crisis of the Iglesia Filipina Independiente in the Parish of Salcedo.” Let Fr. Marero’s article be an initial source of information about the Sagrada Familia of Bantay Kilang.

It has been said that Baugen, now Salcedo, was once a (parish of) solid Aglipayans, and the Sagrada Familia, headed by Doña Tomasa Velasco, played an important role in the expansion of the parish.

I want to talk more about the Sagrada Familia in this article.

About the close of the 18th century, there existed the so-called traditional Filipino Prayer Society. It is a different kind of resistant movement in the cloak of folk Catholicism against the Spaniards and Americans. The Guardia de Honor de la Virgen, was one, a Dominican prayer group led by Julian Paltazar, an Ilocano peasant who lured throngs of followers from Southern Ilocos and formed his new Jerusalem in Cabaruan, Pangasinan, now Cabaruan, Urdaneta, Pangasinan.

When the Guardia de Honor became a resistance group, the Roman Catholic Church withdrew its support and (the Guardia de Honor) formed in 1895, the Catipunan ng Sagrada Familia, led by Lorenzo Luking or Apo Inso, another Ilocano and charismatic wandering preacher throughout Northern Pangasinan and Ilocos, who warned against the 1898 Revolution, exhorting the people to prepare for it through prayer and fasting. This group has made Dr. Jose Rizal their messenger of God. When Rizal died, they flocked to Calamba, Laguna, the birthplace of Rizal, and (later on, they went to) Mt. Arayat in Pampanga, where Rizal had been rumored to be alive.

During the early years of the 19th century, about the time when the IFI was already established, the Sagradas in La Union and Ilocos became too fanatic that they wanted to revive the lost paradise of Adam and Eve. According to the oldest Sagrada, they wanted to establish a nude community somewhere in La Union but the government authorities have been chasing them and sending to prison all those who were captured. Many of them, including Apo Inso, took refuge in the mountains of Galimuyod and Salcedo.

It was that time that Apo Aglipay entered into the scene. He offered himself to be the mediator between the government and the Sagradas. He promised the government to teach and indoctrinate the latter not to appear again in public in nude appearance. From then on, they looked up to him (Aglipay) as their redeemer. (Because of that belief, there were) so many tales about him (like) as (a person that) cannot be killed by bullets during Fil-Am (Filipino-American) war or could become invisible in time of imminent danger because of his anting-anting (amulet). (That was) the very anting-anting or amulet rumored to have embedded by Apo Lakay (Aglipay) at the back of President (Ferdinand) Marcos at his Baptism.

When Apo Inso died, the new Sagradas, which were newly indoctrinated in the teachings and tenets of the IFI (had subscribed to the practices of the IFI but they) built their temple of worship in Bantay Kilang, Galimuyod. (At that time) the Sagrada Familia was led by Doña Tomasa Velasco or Apo Baket or Apo Masa, which had joined in the Parish of Salcedo as (member). Although (she was) converted (as) IFI, still (it retained its leadership with Sagrada Familia and) retained its uniqueness as a religious group (being) dedicated (to a practice of) prayer and fasting.

Apo Aglipay visited the place (Bantay Kilang) regularly. He loved to ride his horse accompanied by a certain Tatta Miron as his bodyguard and guide. They went to the mountain around Kilang to hunt deers and pigs. Most importantly, he loved to visit Kilang to hear (time and) again the Sagradas chant (as) their prayers. Their chant is uniquely different in its beauty and art from that of the Gregorian chant. They do their chanting (that) begins from the sign of the cross until the end, which will last for an hour or more. They do this regularly early in the morning, noon, early in the evening and last, (every) eight o’clock at night. They call the last (chanting) “Para Animas” or for the souls.

Dr. Cornish, the head of the Unitarian Church of America, (when he and his wife vested in the Philippines in 1938), was said to have been visited Bantay Kilang. At that time, Dr. Cornish and his wife served as sponsors of the wedding ceremony between Apo Aglipay and Doña Pilar Jamias. Liwliwa was their only daughter (but died at the age of 18).

Don Pio Marcos, the younger brother of Don Mariano Marcos and uncle of the late President Marcos, have also visited the place. (With) all of these (stories), these tend to show that for many years, during that time of Apo Aglipay, Bantay Kilang was once upon a time at the peak of its glory as of the Bantay Gerizim of the IFI in Ilocos.

There was a chant for Kilang being chanted by the Sagradas which runs:

In short, the Sagradas believed that the place (Bantay Kilang) is a sacred place, a place where all kinds of people will live together in prayer, praise, and thanksgiving, all for the honor and glory of God and His Church, the Iglesia Filipina Indepependiente.

When Doña Masa died, and all the Sagrada leaders died, that unique prayer group as their unique chanted prayers (believed to have) also died with them. (Some of the) families that made the place gloriously went back to their former homes.

(However, there are still remnants of the Sagrada Familia that would be challenged to preserve the chanted prayers, which are precious to the IFI as this Church will live-out its heritage and calling to serve God and people.)

In La Paz, Abra, the Sagrada Familia has been established in the 1880s and when the IFI was founded they joined the new Church. The baptismal record book of the IFI Parish of La Paz has an entry of baptism as far as 1889 under the Iglesia Catolica Apostolica Independiente with Fr. Benigno de Lara as a parish priest.

In Babayoan, Sta. Cruz, Ilocos Sur, the IFI congregation is composed of members from the Sagrada Familia.

*The author wrote the article with assistance from Fr. Mc Greggy C. Cabaya 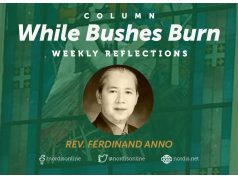 Sherwin De Vera - April 2, 2020 0
In Baguio, regional and local health officials expressed support for extending the Luzon-wide COVID-19 ECQ for about a month, noting a potential halt in viral transmission if pursued, and a virulent resurgence in the City of Pines otherwise.