(Columnist’s note: As the so called First Quarter Storm in the Philippines which signaled the initial huge mass movements against the Marcos regime celebrates its 50th year this 2020, I am reposting an article I wrote about two Kabataang Makabayans who were stalwarts of the movement in Baguio City during those times. The first part of this article is a talk that I shared with the Anakbayan – Southern California USA in 2014. The second part depicts what a night was for a Kabataang Makabayan member in the early 1970’s.)

A KM Lady started it (for me)

Good afternoon to you all.

Yes, I used to be a KM, a Kabataang Makabayan.

I am still a KM. Now Katandaang Makabayan.

In 1968, though, I was a young freshman at the University of the Philippines and I was against the KM. The priests and nuns from the school I came from said that these KMs are violent communists.

In my first semester I also dropped my pol sci class because I could not understand the bourgeoisie and proletariat thingy.

However, among these communists, there was this lady.

So she invites me to this School for National Democracy. A subject then was on the miseducation of the Filipinos.

I went not to be reeducated but because of her.

Nonetheless, the discussion leader was saying that Andres Bonifacio should be the national hero of the Philippines. I said what? From grade 1, I was taught that Jose Rizal is the national hero and I vehemently asked why?

He said because Bonifacio is a proletariat.

Proletariat? I dropped my poli-sci because I could not understand what proletariat means.

I walked out. Never mind if the KM had a pretty communist.

Weeks later, however, a protection racket gang extorted money from my Dad. One of them cocked a 45 at my Dad’s face, threatening to shoot if he did not give them money for goat pulutan. My father wet his pants and my mom’s business income that night was siphoned.

I became like a sponge. The pretty communist related the extortion to crime and poverty being engendered by the semi-colonial and semi-feudal situation of the Philippines which must be eradicated.

No longer was she just a pretty communist. I also became a handsome Kabataang Makabayan comrade.

I became that petty bourgeoisie youth intellectual, who by class definition, could be a catalyst of the revolution – the future of the motherland.

I then understood why Rizal was made the national hero by the US enforced educational system. Rizal was for reform that would maintain the colonial status quo.

I understood why Bonifacio should be the national hero. He stood for abrogation of oppressive systems imposed upon the exploited.

I took part in the dubbed second propaganda movement to expose and oppose the tripartite evils of imperialism, feudalism and bureaucrat capitalism.

We had no computers, Wi-Fi, cell phones. If a pen is mightier than a sword, our typewriters were our bazookas. There were no printers. We had to pound our thoughts on cut stencils with typewriters and grind our manifestos through mimeographing machines. We joined rallies early the following days with inked hands and noses. We hand painted placards and banners. We red painted walls with slogans in the wee hours of the mornings

In exercising my sham right of freedom of expression and assembly, I had my share of being truncheoned and jailed. Street pitch battles with us armed only with Molotovs and pill boxes became a common occurrence. Death among us in the streets only served to inflame our fervor more.

We integrated with workers, supported unions, and joined strike picket battles. I almost died once as we laid on the street to prevent gargantuan trucks from coming out of this cement company to deliver products for where they were going. We were violently dispersed by the Philippine Constabulary.

We integrated with the peasants.

Many of us became political officers of the New People’s Army.

There was not much of an NPA to talk about then. The arms were a pitiful number of small guns. We contented ourselves saying, actually we have millions of guns. We are just waiting for the enemy to deliver them to us. We had the most important arm of all. We had the heart to fight. We were and are armed with the revolutionary theory.

Nonetheless, that was only a dream then.

In 2004, I had to do an article for Ventura County Star on the NPAs. I went back to the hinterlands.

Thousands of arms had already been delivered by the enemy to the NPA. Former ragtag groups evolved into uniformed units. We are no longer talking about less than a squad of NPAs. We are talking of fully strong armed platoons and companies. No longer was the NPA confined to the Central Plains and Cagayan Valley in Luzon but dot almost all the islands of the archipelago.

The dream of liberation continues to be evolving into reality.

The Kabataang Makabayan contributed and continues to contribute to this evolution.

It was also a revolutionary theory and a dream then that the Philippine struggle will have an internationalist component.

You, members of the Anakbayan and other progressive organizations in the United States and other parts of the world are a realization of that theory and dream.

Like the KM of then and now, you are serving as a catalyst in the struggle of not only the oppressed in the Philippines but also of the exploited in an international scale.

And in the context of Historical Materialism, the dream of liberation for the oppressed of the world will surely become a reality for you are here like the KM and you are the nightmare of Imperialism, Feudalism, and Bureaucrat Capitalism.

For you are now the future not only of the motherland but of the world.

By the way, the pretty communist I mentioned earlier died in the Mountains of Cordillera in Northern Luzon. Her name is not only chiseled in the Bantayog ng mga Bayani but in many hearts of the People she served.

Her name is Jennifer Kintanar Carino.

She was a Kabataang Makabayan.

A night with Peppot Ilagan

The ‘takatak’ of the typewriter only poses when Peppot sips in smoke from the cigarette already seared to its butt. With tremoring fingers, he pops another Marlboro stick and inhales from the fresh cigarette while stubbing the diminished butt upon an ash tray already full with protruding witnesses to ideas already punched on the uncomplaining stencil inserted within the roll of the war wording machine. Peppot reviews briefly what he has already written while taking another sip. He then blows the smoke from one side of his lips as he keeps the cigarette on the other side. With smoke curling in front of his face, his fingers resume to fly over the keys consumed with the flow of ideas borne out his wanting to serve the people.

Once in a while, his fingers would snap on wrong keys. Ay mali. He would then patiently paint over the errors with pink correction fluid, blow on it like playing the harmonica, wait for a few seconds for the fluid to completely dry, and resume typing like the ideas would vanish if he does not hurry to drill them into the stencil which would help denounce who we should denounce that day.

It must already be 3:30 in the morning when he creeeeeks out the stencil from the typewriter. “Rudy, check na this,” he would say, handing me the stencil. Check means, to me, just check for typos. I seldom check his ideas for, to me, they were almost always perfect. Check means to me, learning again from my mentor, apart from the ideas, on forms and style of writing those ideas.

In those early stages of the quarter storm, ventilations were on police brutality, high tuition fees, escalating price of commodities. Wala pang Mabuhay ang Bagong Hukbong Bayan but Peppot was already at the throes of it.

By this time he had already primed the mimeographing machine, spreading the black ink evenly in-between the rollers. I would have already tore the carbon paper and the backing from the coated stencil sheet. He would then gingerly plug in the perforated head of the sheet unto the sprockets of the machine while I prep with whirring sounds the first batch of mimeographing papers and put them unto the ‘in’ receptacle.

We do a test print. Perfect.

We take turns in manually rolling those manifestoes that spells doom to whoever Peppot, on our behalf, has targeted that day.

By sunrise, we are eating breakfast with our blackened hands.

By midmorning, a rally starts with activists distributing those manifestoes. Not everyone knew how much thinking and labor went into it. Not everyone really knew how it came about or who did it. Manifestoes then were never signed by anyone, mostly by Peppot.

He was a Kabataang Makabayan.

Their Spirits live on

Jingjing and Peppot are gone now but their spirits live on. The ideals they lived for still persist because the prevailing situations still call for their ideals to persist. Those ideals have evolved by leaps and bounds from that First Quarter Storm to more explosive storms; explosive and more destructive than millions of Taal Volcano explosions for they are now burning in the hearts of millions who carry on the fire to finally bring down the oppressive forces for which these ideals are the reasons for their being. # nordis.net

On the PROCOR Command Journal red-tagging groups, and individuals as CFO... 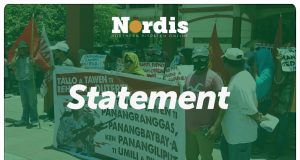 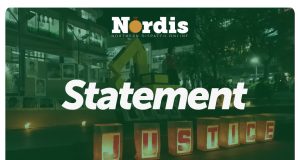 10 years of Ampatuan Massacre: End a Decade of Injustice! Convict...