Home Altermidya Lam-ang: a story of leadership and self-realizations 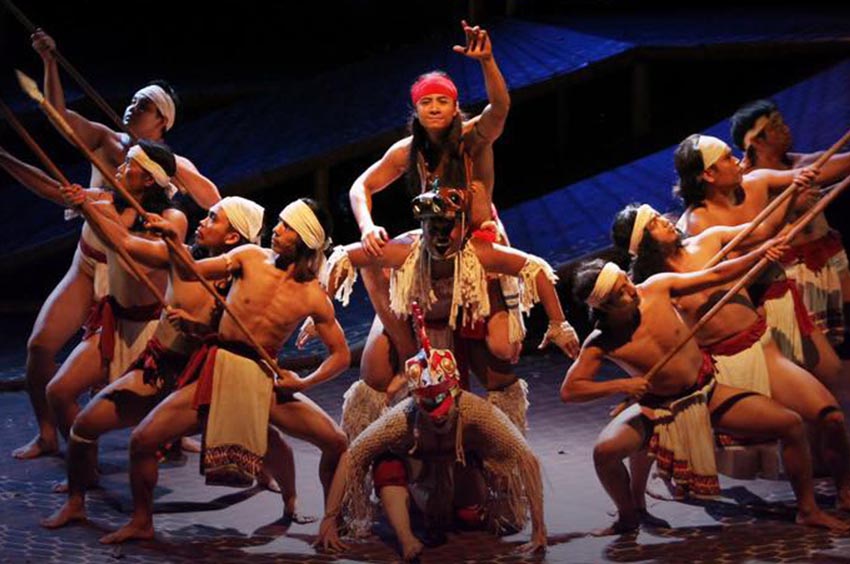 For the third production of Tanghalang Pilipino’s MAKIDIGMA Season, TP ignites the soul of the nation with ‘Lam-ang,’ an ethno-epic musical and reimagination of the Philippines’ famed epic Biag ni Lam-Ang.

Lam-ang was born in wartime. His tribe was forced out of their lands by their enemies; the head-hunting Igorots, and his father Lokan had to stay behind so his then pregnant mother Namongan can escape to safety along with their tribespeople.

Fully-grown, Lam-ang managed to defeat the leader, Gumakas, all on his own. He was devastated when he found out that despite his triumph, Gumakas had long taken the head of his father. He ventures back to his tribe to announce his victory over the Igorots, but as he lowers down the skull of his father to his mother’s arms, Lam-ang feels the sense of loss and emptiness slowly bubbling up inside him.

Now that he has defeated their enemies, retrieved both his father and the land of Nalbuan, Lam-ang is at a loss. He feels as if he hasn’t done enough to warrant the title of Lakay, and that his father had left him very big shoes to fill.

As he laments over this, Lam-ang slowly develops a twisted sense of leadership. The audience slowly see him transform from a young hero into a ruthless conqueror. Lam-ang, in his loss of guidance, had decided that by conquering all the lands near Nalbuan, he can provide the best for his tribe.

Despite this, Lam-ang’s mother and tribe elders continued to tolerate his behavior, going with his every decision even though they know that it was not the right thing to do.

Sumarang, Lam-ang’s mentor and sworn-brother, had been the only one who was vocal about his disagreement with Lam-ang throughout the play.

In an effort to make Lam-ang realize his wrong doings, Sumarang invoked a duel to death to which Lam-ang agrees. The battle ended with Sumarang’s death. The death of Sumarang signified the people’s realization that they have left something very wrong go on for far too long and now it is too late.

Famine becomes the retribution of Lam-ang’s greed. Because of his disrespect towards the gods, the people of Nalbuan is having a crisis over food. Tandang Guibuan, the tribe elder, had decided that offering their remaining food could appease the gods.

Seeing his people suffer, Lam-ang confronts Tandang Guiban. The elder retaliated and said that the people of Nalbuan is suffering because of Lam-ang’s greed.

Then, we can see a spark of realization in Lam-ang’s face, but stubbornly he still insisted that he could end the famine if he conquers the lands by the sea, Kalanutian.

Kalanutian is ruled by Kannoyan, who was said to be the fairest woman in all lands.

She, like Lam-ang, is ruling over the many lands she had inherited from her father, but unlike the hero, Kannoyan knows that leadership is not just about being the strongest among others. She taught Lam-ang this while she was pretending to be a commoner, and said that Lam-ang needed to become a leader who leads, not with strength and violence, but with trust.

After his realization, Lam-ang ventures back to Nalbuan and asks the help of his people. Unsurprisingly, the people of Nalbuan are reluctant to follow him after he had broken their trust. Lam-ang goes down on his knees and asked them to trust him one last time. Seeing his sincerity, his people agreed to come with him to Kalanutian.

As an answer to Kannoyan’s request, Lam-ang had brought to her the most precious treasure he owned; his people. Moved by the changed Lam-ang’s sincerity, Kannoyan agreed to marry him and asked him to rule Kalanutian alongside her.

But not everything ends in a happy note.

After Lam-ang and Kannoyan’s wedding, the people of Nalbuan and Kalanutian celebrates. Lam-ang, as a way to show his gratefulness to their people, had volunteered to catch fish for their guests.

The gods he had angered by his selfishness and greed, then claims Lam-ang’s life while he is in the sea.

The last scene ended with the people of Nalbuan and Kalanutian mourning over Lam-ang’s death, as Lam-ang is shown following after his father and Sumarang to the afterlife.

A series of firsts

Born out of a thesis production from UP Dulaang Laboratoryo, the musical whose original title was ‘Lam-ang, Ang Sugo ng Nalbuan,’ was the answer to TP’s long search for new materials that would feature the Philippines’ tradition and origin.

TP wanted to reintroduce Lam-ang to the younger generation of Filipinos, and introduce further knowledge and deeper understanding to these narratives that most Filipinos only briefly know of through their books in Araling Panlipunan.

Although the characters and the main parts of the stories remain familiar, the musical Lam-ang is a reimagination of the famed hero and his epic battles. The play showcases a Lam-ang who was thrust into leadership, unprepared and how it caused the loss of his sense of purpose, as well as the reason for his downfall.

It was a new take on the story of the heroic Lam-ang, who has always been portrayed as the perfect hero who triumphs over all the obstacles in his life. It shows Lam-ang who also needed to battle himself for his lust for violence and power.

Lam-Ang’s lead actor JC Santos had also admitted that he’d been away from the theater stage for too long and re-learning the discipline of acting on stage has been difficult for him. Lam-ang is his first lead role and first stage play in Tanghalang Pilipino.

Anna Luna also makes her debut in the stage of Tanghalang Pilipino as the female lead Kannoyan.

“I am so honored and grateful for the trust given to me to play this landmark role of Kannoyan,” said Luna.

TP’s adaptation of Lam-ang also showed a version unlike the previous adaptations. The creative team of Lam-ang had decided to remove all the aspects of colonialism from this new adaptation.

They had introduced Lam-ang’s father, Lokan, who is purely from the tribe of Nalbuan unlike the previous adaptations which depict Lam-ang’s father to be Don Juan Panganiban.

The play had also removed the epic’s depiction of the Igorots as barbarians as well as the concept of resurrection.

The creative team of the play had wanted to portray a more native version of Lam-ang, and remained true to the traditional aspects of the story including the costume and props design, and the new additions to the original storyline.

The newness of the adaptation is palpable in the show’s first run.

There were plenty of times where technical difficulties became an issue, like when Tex Ordones-De Leon’s character, the babaylan Baglan, was narrating the story through a song and her mic had turned on later than expected.

This happened plenty of times. But in a show of professionalism, the actors clearly adapted well and pitched their voice louder in preparation for these small bouts of slip-up.

The songs also showcased many traditional aspects, including hair-raising chants that are incorporated in every scene. The tribal chants added a more solemn and intense effect to the sequences that show some of the character’s death.

Lam-ang’s traditional set-up reminds you of similar-styled musicals such as Lion King, who boasts about the rich tradition of Africa and remained true to its roots until its very recent run.

The ethno-epic musical Lam-ang had managed to do the similar, igniting the stage with colorful uwes blankets of the Ilocos regions before the Spanish colonizations. The actors were dressed in the traditional clothing of the different tribes in the region. Raflesia Bravo’s Saridandan boasts clothing similar to the Bataks in Palawan, where women traditionally do not cover their torso.

The dedication of the creative team and the cast to remain true to the roots of the tribes in the Philippines sends a clear message of how they wanted the younger generation of Filipinos to re-educate themselves on our culture.

The musical takes on a different ending from the usual narration of the epic, and had left the audience questioning their knowledge of the story.

Tanghalang Pilipino’s depiction of a grayer Lam-ang depicts how leaders are not born, they are taught. No matter how bright and promising Lam-ang was, he still went down a very dark path mostly because the guiding figures around him had let him and tolerated his mistakes until the very end.

If there was one thing the musical made sure of though, was Lam-ang’s love for his land and people.

Though he did go about and showed it in the wrong way, it was clear throughout the play that Lam-ang had always only wanted his people to be happy. But just like what Kannoyan had said, “Ang pamumuno ay hindi nakatindig sa lakas at dahas lamang.”

Lam-ang runs from December 6 to December 15 at the Tanghalang Aurelio Tolentino, Cultural Center of the Philippines. Tickets are available at the CCP Box Office as well as in Ticketworld, Ticket 2 Me, Blimo, and Tanghalang Pilipino office. # nordis.net 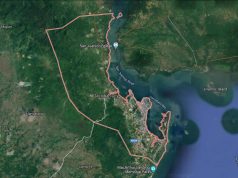