VIGAN CITY, Ilocos Sur — Bagong Alyansang Makabayan (Bayan) – Ilocos subjected its office in the city for search and inspection by officials from the barangay and personnel of the Commission on Human Rights (CHR) Region 1 on Friday, December 6.

He also appreciated the effort of the group to inform them of their concern and the initiative to let authorities search their office and premises.

“Ket sisasagana ti intero a barangaymi apo nga umay umarayat no adda man kasapulanda ken mangpaneknek ti kinataoda (The entire barangay is ready to assists if they need something and vouch for them),” he added.

Investigators from CHR-1 concurred with the findings of the officials from the barangay.

“So far awan ti nakitami nga illegal a gamit wenno aniaman a maikaniwas iti linteg maipanggep iti inaramid tayo a voluntary search (So far we did not see any illegal item or anything contrary to the law during the voluntary search we conducted),” Bandolin said.

He also noted that the place is a legitimate office of the organizations undertaking legal work.

According to him, given the present political situation, the marching order their director is to be vigilant of abuses committed by state actors.

“So far ti CHR Region 1 ket agbanbantay ti aniaman a panangbauso ti state actors ta isu met ti marching order kanyami ti directormi, no adda panagabuso ti PNP wenno militar, ken tapno maiwasasn dagiti illegal search a mapasamak (So far, the marching order of our director is for CHR Region 1 to keep an eye for violations committed by state actors, if there are abuses committed by the PNP or military, and to prevent illegal searches from happening),” he explained.

Antonino Pugyao, the chairperson of Solidarity of Peasants Against Exploitation (Stop Exploitation), explained the reason why they requested government officials to inspect their office. Stop Exploitation is a member of Bayan Ilocos, along with Ilocos Human Rights Alliance (IHRA), Anakbayan Ilocos, and other sectoral formations.

“Ti primary objectivemi no apay ipa-search ti opisina ket tapno paneknekanmi a daytoy nga opisina ket legal ket awan ti ilemlemengmi nga armas, awan ilemlemmengmi a droga wenno aniaman nga illegal a banag (Our primary objective why we requested the search is to prove that this is a legal office and we are not hiding any weapon, we are not hiding drugs or anything illegal),” he said.

According to him, they were forced to leave their old office last March. This was after members of the Bantay Municipal Police told barangay officials and the owner that two NPA members regularly visit the place. Besides the fabricated story by the police to frighten the house owner, state agents also monitored the area continuously.

He said they are worried that the series of raids of activists’ offices in Negros Occidental and Manila, and arrests of 57 persons from these incidents, would also happen in Ilocos.

“Amakenmi la unay apo a mapasamak ti kadiay isu a nagkaykaysakami apo nga ipasukimatmi daytoy opisina ken ipakaamomi kadagiti opisial nga adda kami ditoy ket silulukat no adda kayatda nga ammoen kasilpo iti trabahomi  (We are really concern that such thing will happen, so we agreed to ask the officials to check our office and inform them that we are here and open to anything they want to know about our work),” he said.

However, Pugyao admitted that submitting their office for voluntary inspection is not a guarantee that state forces will spare them from illegal raids and searches. 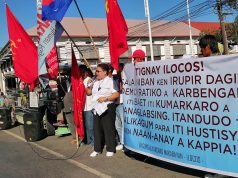