SAN FERNANDO CITY, La Union — The Ilocos Center for Research, Empowerment, and Development (ICRED), Inc. decried the harassment of its staff and partner organization by the Philippine National Police (PNP) during its activities in Agoo, La Union in November this year.

In a statement dated November 30, ICRED said PNP personnel questioned and tailed leaders and members of Timek ken Namnamma dagiti Babassit a Mangnalap iti La Union (Voice and Hope of Small Fisherfolk in La Union or TIMEK). The fisherfolk organization is its local partner and the beneficiary of several activities conducted by the office in the municipality.

Florence Kang, officer-in-charge of ICRED, said the incidents happened during its recovery assistance program for communities ravaged by Super Typhoon Ompong (Mangkhut) in the town.

Asked for details, he said they were at the areas conducting follow-up consultations for the continuing rehabilitation and livelihood support programs.

“We continuously monitor the development in our service areas and projects. Consultations with our partners and beneficiaries give us insights on what is still missing and how to improve our services. Also, we regularly check their disaster preparedness and update their contingency plans, which they created through our facilitation,” he explained.

Kang views the incidents as part of the intimidation of their staff and partners from pursuing their demands from the government to provide sufficient assistance to assists their recovery. According to him, the red-tagging and harassments of development organizations, like ICRED, hampers the delivery of services to the people, “especially in areas where government support is lacking or non-existent.”

“The continued threat and harassment of our staff and partners is condemnable and should stop. Tagging organizations and groups that empower marginalized and poor communities as communist fronts and enemies of the state puts the life of development workers and their partners in danger,” he added.

According to ICRED, uniformed Agoo police questioned TIMEK members in Barangay San Isidro on November 17. The incident occurred during their Food for Work Program supported by the Department of Social Welfare and Development Regional Office I (DSWD-RO1). The PNP kept asking the beneficiaries of the nature of the activity and claimed that DSWD does not know the event.

Reached for details, TIMEK coordinator Edward Kuan told Nordis that the hostile and accusatory questioning by the police continued even after they presented the documents from the DSWD regarding the program. The police also dismissed them when a TIMEK member handed them a phone so that the officers can speak with the regional social welfare office.

He also recalled that two men on a black motorcycle tailed him on his way home from the activity. The suspected state agents took pictures of him inside the tricycle up to his destination.

He said the men were carrying photos of Cacayuran and other members of their organization. Later, they were able to confirm that the images were from a beneficiary meeting for early recovery assistance facilitated by ICRED in the town.

Kuan said that on November 24, their chairperson reported observing two persons on a black motorcycle following him around San Manuel Norte village when he went there to fish.

Red-tagged by the state

ICRED, a research and disaster preparedness and response institution based in Laoag City, Ilocos Norte, was among the organizations named by Armed Forces of the Philippines (AFP) Deputy Chief of Staff for Intelligence Major General Reuben Basiao as part of the “communist terrorist groups.” The military officer claimed on November 5 during a hearing in the House of Representatives (HOR) on the AFP Modernization Program.

In a statement released the day after the HOR hearing, ICRED said the accusation made “puts humanitarian and development workers in grave danger.” The institution expressed concern that being on the list opens them to harassments by state agents while providing services to different communities.

Established in 2008 by development and church workers, ICRED provided services to thousands of beneficiaries and survivors of calamities. The institution helped capacitate communities in dealing with calamities and disasters by developing community-based disaster risk reduction and management (DRRM) plan.

“The training and programs we implement in communities are coordinated with local authorities. We also conduct joint activities with government agencies and local government units,” explained Kang.

He said pointed out that contrary to what the defense officials are claiming, ICRED for years has worked with government offices to strengthen their DRRM programs. According to him, their community-based training and disaster response program, they have augmented the limited resources of local governments. The actions, he said, “bridge the gap between far-flung communities and their officials through our coordination with the local chief executives.”

“In our training and disaster responses, we don’t undermine the government. However, we are duty-bound to inform the people of the responsibilities of the government during calamities and disasters. The same manner that we suggest policies and programs for local officials to consider,” he underscored.

ICRED is also a member of the Asia Pacific Alliance for Disaster Management (APAD) Philippines National Coordinating Committee. Its staffs serve as the secretariat for the Ilocos Regional Platform with the Nueva Segovia Consortium of Cooperatives (NSCC) as the lead convener. # nordis.net 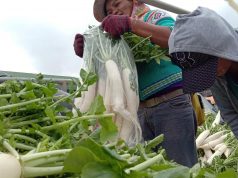