BAGUIO CITY — Members of Timpuyog dagiti Mannalon ti Kalinga (TMK or Farmers Unity in Kalinga) called for the repeal of Republic Act No. 11203 or the Rice Trade Liberalization Act (RTLA) during their 8th General Assembly held in Tabuk City on October 18-19, emphasizing the law will eventually kill the rice industry.

The TMK leader said the P15,000 (US$ 293) loan assistance from the Department of Agriculture would bury farmers in debt since they cannot earn much with the current palay prices. He also lambasted the agriculture department for failing to push for the implementation of other safety nets and settling with a meager P5,000 (US$ 97.42) cash grant for affected farmers.

TMK also sought a dialogue with the provincial Department of Agriculture (DA) office for better agricultural support for Kalinga farmers, urgent of which is the plummeting palay prices.

Based on his experience cultivating a hectare of ricefield in Dilag, Tabuk City, he needs 9 to 10 sacks of chemical fertilizers. At the current price of palay, he said there is no way to recover his expenses.

“Adun dagiti mannalon a makapunpanunot nga ag-covert ti dagana ta daytoy pirmi ti panaglugida. Diay laeng makan ti imuladan tapno mabiag ta diay ilako ket saan na masungbatan ti gastos para farm inputs (Many farmers are going bankrupt and now thinking of converting the use of their farms. They will only plant for their consumption since their earnings from selling palay can no longer cover their expenses for farm inputs),” he lamented.

He pointed out that Sen. Cynthia Villar, the leading proponent of the RTLA, is a real estate developer who would greatly benefit from land conversion. He also noted that besides their interest in land and property, the Villars also import commercial rice.

TMK and CPA Kalinga are supporting the passage of House Bill No. 447 or the Rice Industry Development Act (RIDA) filed by the Makabayan Bloc in the House of Representatives. The bill stands against importation and hinges on the comprehensive development of the rice industry as the cornerstone of the country’s food security. If passed into law, it will task the government to implement programs to capacitate farmers to become individual producers. The bill also strengthens the National Food Authority’s procuring functions.

Kalinga produces 38 percent of the total palay harvest in the Cordillera Administrative Region (CAR) based on government data. The bulk of production comes from the plains of Tabuk City where farmers can plant rice twice a year to more than 15,000 hectares of irrigated lands according to records of the National Irrigation Admiration. Palay harvest in CAR accounts for 2 percent of the national output. # nordis.net / with reports from Rogyn Beyao 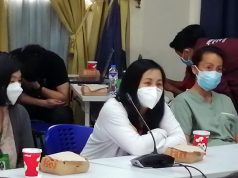