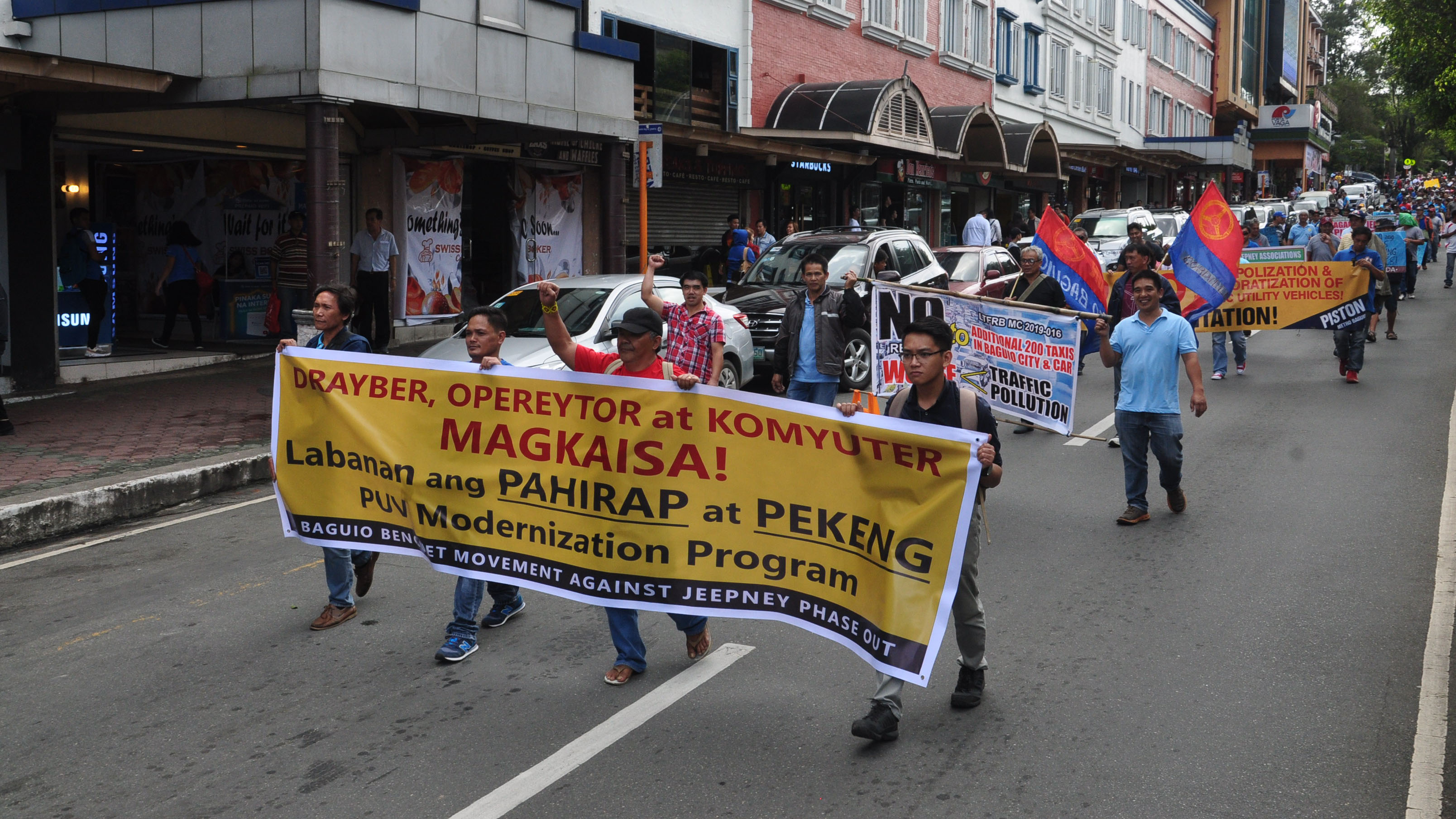 BAGUIO CITY — Some 300 drivers and operators joined the nationwide protest against the government’s Public Utility Vehicle Modernization Program (PUVMP) that forces them to replace their existing vehicles with units that cost millions.

From 18 jeepney operators and drivers associations (JODA), the protesters swelled to 60 JODAs from two federations when they reached and picketed the Department of Transportation (DOTr) regional office in the city.

“This [PUVMP] will take away our livelihood. You want to take away our franchise and give it to big transport corporation,” said Lito Wayas.

Wayas, the chairperson of Piston-Metro Baguio and convener of the Baguio-Benguet Movement Against Jeepney Phase-out (BBMAJP), explained that they are not against modernizing the transport sector.

According to him, they have been appealing since 2017 for authorities to prioritize the rehabilitation and upgrading of their vehicles than obliging them to buy new ones. He stressed that there are fabricators in the Benguet capable of retrofitting their roadworthy vehicles with the mandated specifications of the government.

“If we have to change our engine to comply, then we can replace it. The government should focus on assisting the rehabilitation of all jeepneys that are still roadworthy,” Wayas said.

Under the PUVMP, vehicles should at least be Euro 4 compliant or higher, based on the Emission Standards of the European Union. The classification pertains to the number of pollutants released by the vehicle.

After the brief picket at the DoTr office, the protesters marched down Session Road and assembled at the Igorot Park for a short program.

Here, Josefino Bautista, one of the conveners of BBMAJP, explained why PUVMP favors big transport corporations and cooperatives. He said that by imposing the fleet management system, the government handed the entire public transport service to those who can afford to buy and maintain several vehicles.

“This modernization program is a sham. It intends to benefit the rich and big corporations. Besides requiring us to be part of a fleet under a corporation or cooperative, the program also requires installation of many amenities,” he said.

Under the Department of Transportation (DoTr) Order 2017-011 or the Omnibus Franchising Guidelines released on June 19, 2017, only corporations and cooperatives, operating with 15 or more PUV units, can apply for a franchise.  The order also specified the installation of a closed-circuit television camera, Automatic Fare Collection System (AFCS), a GPS navigation system, dashboard cameras, Wi-Fi, and speed limiters.

Speaking before the assembled crowd, Benjamin Ablania from the Aurora Hill jeepney group said, “We ask the [government] not to shove to our throat that P2.3 million-worth of vehicle.” He

“We cannot afford the unit they are forcing us to acquire. The amortization is about P38,000 monthly, and we have to deposit 5 percent of the P2.3 million [before we can get the unit],” he explained.

Ablania said they also have to deposit P50,000 for the maintenance of the unit to the company where they purchased the vehicle.

“We already find it hard to buy our tires because we get our daily needs from our earning driving our jeeps,” he said.

The case study conducted by Piston-Metro Baguio and Alliance of Jeepney Operators and Drivers Associations in BLIST showed why they could not afford the units promoted by the government. BLISTT stands for Baguio City and the adjacent towns of Benguet — La Trinidad, Itogon, Sablan and Tuba.

Based on the study, an operator usually earns from P9,000-13,000 monthly depending on their route. The amount does not exclude the expenses for the maintenance of the vehicle.

Meanwhile, those who will acquire the models promoted by the DoTr to replace their jeeps range from P1.6-P2.3 million. The government provided a subsidy of 80,000 per unit and financing contracts with banks for a 6 percent interest. The operator needs to save at least P800 per for its monthly amortization.

According to Bautista, since all the requirements will result in higher expenses for operators, a fare hike is inevitable.

“If this [PUVMP] pushes through, we will be forced to charge a higher fare to commuters. We need to earn more to buy our loan from the bank, to maintain our vehicles and those gadgets they want us to install,” Bautista aid.

He also cautioned the public that the issue does not end with the corporatization of the transportation sector.

“Remember that previous government privatization programs led to deregulation. In this case, the removal of control and public participation on fare once big businesses take over the service,” he said.

On July 29, Memorandum Circular No. 2019-35 of the Land Transportation Franchising and Regulatory Board (LTFRB) took effect. The order essentially deregulated fare for a public utility vehicle. Section 4 of the document states, “the LTFRB, without the need for public hearings and other special proceedings, increase or rollback the fare.” # nordis.net