QUEZON CITY — In the more than 40 years that Regino Cacuyong of Pinili, Ilocos Norte panted tobacco, there was no season that he did not incur debts. He is one of the few farmers in their village that continue to plant Virginia tobacco despite the problems encountered in the industry.

“Cultivating tobacco is expensive and burdensome, but loans and the market for the crop are readily available,” he explained in Ilocano.

According to him, it takes six months to grow the plant and make it marketable. Within the period, his net earnings are about P10,000 (US$193).

“Not included in the expenses is the value of labor from my household. While we wait for our harvest [and trading season], we borrow money for our daily needs,” he added.

The situation of Perlita Farro of Aringay, La Union, is no different. Like Regino, she cultivated tobacco for more than 40 years. Because Virginia tobacco is laborious, she shifted to the Native (Batek) variety, hoping that work will be much lighter. However, the required labor, expenses, and income were almost the same.

She said the times that she has no debt after selling her tobacco can be counted with her fingers.

“I have yet to pay my loan last cropping season, but I have to ask for credit again so that I plant this year,” she said.

The two were among the farmers led by Solidarity of Peasants Against Exploitation (Stop Exploitation) who joined the Tobacco Tripartite Consultative Conference (TTCC) last September 25 in Quezon City. TTCC is a biennial dialogue between tobacco farmers and traders to come up with the new floor price of tobacco. The National Tobacco Administration facilitates the discussion.

While Regino negotiated inside together with other leaders of farmers’ organizations, Perlita was outside leading the protesters demanding a substantial increase for their product.

“The traders look at us like beggars offering a measly increase of P1.00 (US$0.019) for all tobacco types and grades. It is like begging for something that is rightfully ours,” he said.

More than the disappointment for the meager increase, what insulted the farmers was the absence of tobacco company officials who can give them a definite response on their demand.

For Perlita, tobacco traders showed their disinterest with the talks when they sent representatives that could not give decide and close negotiations.

According to National Federation of Tobacco Farmers Association and Cooperatives (NAFTAC) president Bernard Vicente, their last demand was P5.00 (US$0.096) increase for Virginia and Batek (Native), and P7.00 (US$0.13) additional for Burley. However, the representative of the buyers dismissed this and maintained their offer.

“They [representative of buyers] explained that they still have to consult first with their managers,” he said.

He explained that on the part of NAFTAC, they have sufficiently presented the “cost and return analysis” of producing tobacco.

“We asked them [traders] to also present their cost and return for producing cigarettes and exporting tobacco [so we can understand their offer], but they refused,” he added.

Vicente said it is better to maintain the old price incase the traders will not grant their last proposal. He said they will let the farmers decide if they still want to plant tobacco.

“Since did not agree on the price, NTA will call for another round of negotiations to see what if we can still arrive on something,” he Vicente.

Based on the result of the calculations made by the technical working group assigned by the NTA for the negotiations, the increase for Virginia is P7.00 (US$0.13), P24.00 (US$0.46) for Burley and P33.00 (US$0.64) for Native. The proposed increase came from the unified cost of production, including the 25 percent mark-up to ensure “reasonable return of investment” for farmers.

Result of the computations made by the technical working group based on the unified cost of production submitted by farmers during the August 29 pretripartite workshop in Candon City. Exchange rate at US$1.00 = Php51.89

Stop Exploitation said the meeting proved that NTA is inutile and biased towards the traders.

“The primary mandate of NTA is to protect farmers. However, when the traders gave an unfair offer, we did not receive any support from them,” said Stop Exploitation secretary-general Zaldy Alfiler.

He added that NTA officials are even the ones prodding farmers during the negations to accept the paltry increase proposed by the tobacco buyers.

“The agency can’t even ensure the presence of responsible officials of tobacco companies to attend the tripartite. In cases like this, they should give importance to our demand,” he said.

According to him, the P7.00 increase asked by NAFTAC for the floor price of Virginia was already minimal. Based on their study, the price should be P128 per kilo of dried tobacco leaves, without classification. The figure, Alfiler said, is the “just and rightful compensation for the expenses and sacrifices of farmers.”

With the increasing regulations imposed on the tobacco industry and low price, Vicente said that local governments should prioritize the support to farmers to allow them to plant other crops.

“Local governments should give sufficient support from the Republic Act 7171 while they are still receiving funds,” he said.

The primary reason why tobacco farmers find it difficult to shift to other cash crop is the lack of support from the government. This was the findings of the research undertaken the Action for Economic Reforms and the American Cancer Society.

Article 17 of the Framework Convention on Tobacco Control mandates that parties to “promote, as appropriate, economically viable alternatives for tobacco workers, growers and, as the case may be, individual sellers.” The Philippines is a signatory of the convention; however, with the billions of local government shares from the collected excise tax, officials are aggressively campaigning the cultivation of tobacco.

“With the present situation, local governments should prioritize programs that will increase our income instead of putting more funds for infrastructures,” said Alfiler.

He added that political dynasties are the ones who benefitted from the billions of excise tax received by the local governments in the Ilocos region.

Meanwhile, Regino and Perlita said that when they return to their village from their trip to Quezon City, they would have to see local traders.

“We just have to beg them to let us get another loan so we can plant and hopefully pay our growing debts to them,” they said. # 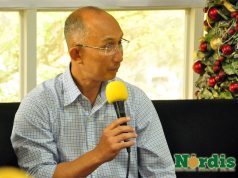 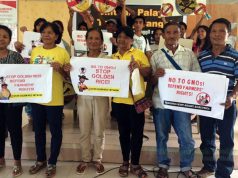 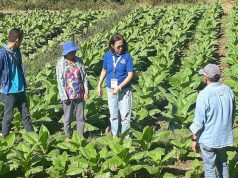 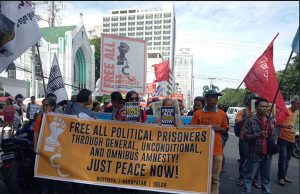