In a document provided by the National Tobacco Administration (NTA), the TWG recommended a P7.00 increase across all grades of Virginia tobacco. The basis of the amount is the output of farmers during the pre-tripartite conference.

However, Vicente said the figure is “very far from what we computed during the workshop.” He said they would question the proposal in the meeting and seek an explanation from the TWG how they came up with the amount.

In the August 29 pre-tripartite workshop in Candon City facilitated by NTA, farmers came up with a cost of production that requires P28.21 increase for Virginia. Farmers and traders will deliberate the rise on the floor price at the biennial NTTCC on September 25. The NTA will facilitate the negations at the agency’s main office in Quezon City.

“The cost of production we presented was the result of a consensus of tobacco framers in different provinces; they cannot change or set it aside,” explained the NAFTAC president.

According to the NTA, Virginia tobacco comprised about 53 percent of the total production in the country in the last three years (2016-2018). More than 90 percent of this volume comes from the Ilocos region.

Meanwhile, the NTA-TWG recommended P24.00 increase across all grades for Burley and P33.00 for the Native variety. A note below the page said the unified cost of production (COP) used the wage rate of the Department of Labor and Employment (DOLE). Below are copies of the document from NTA: 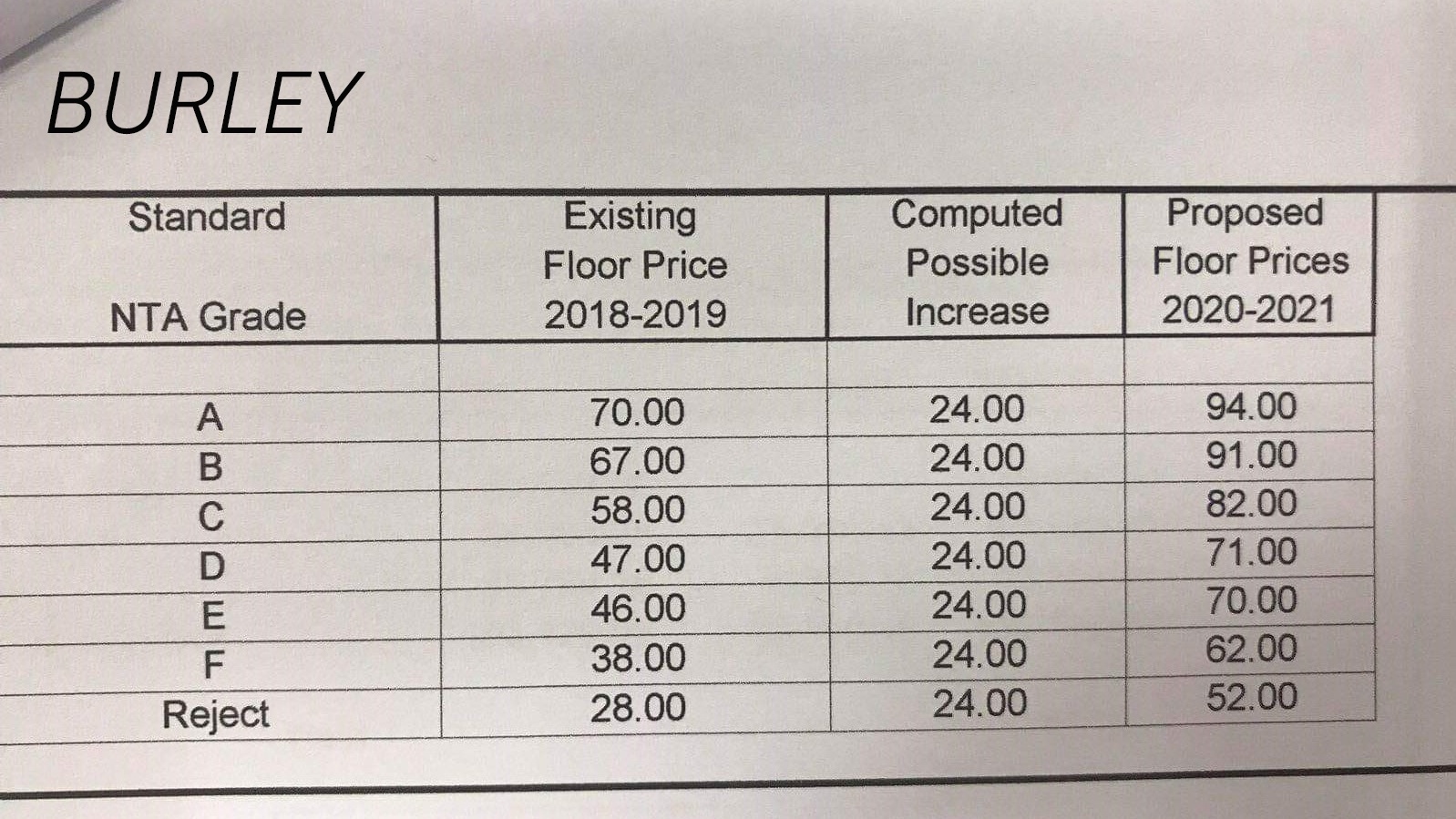 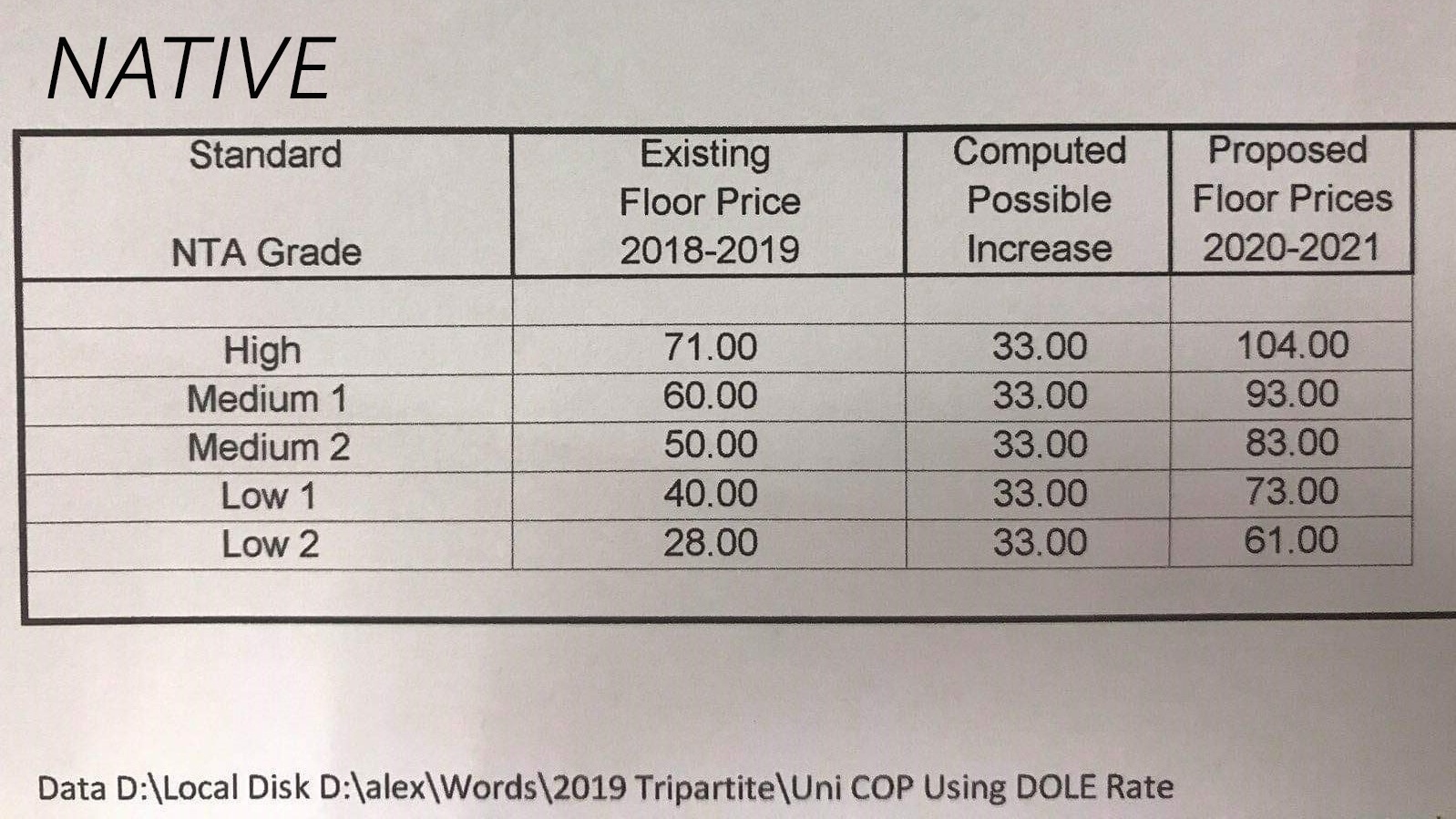 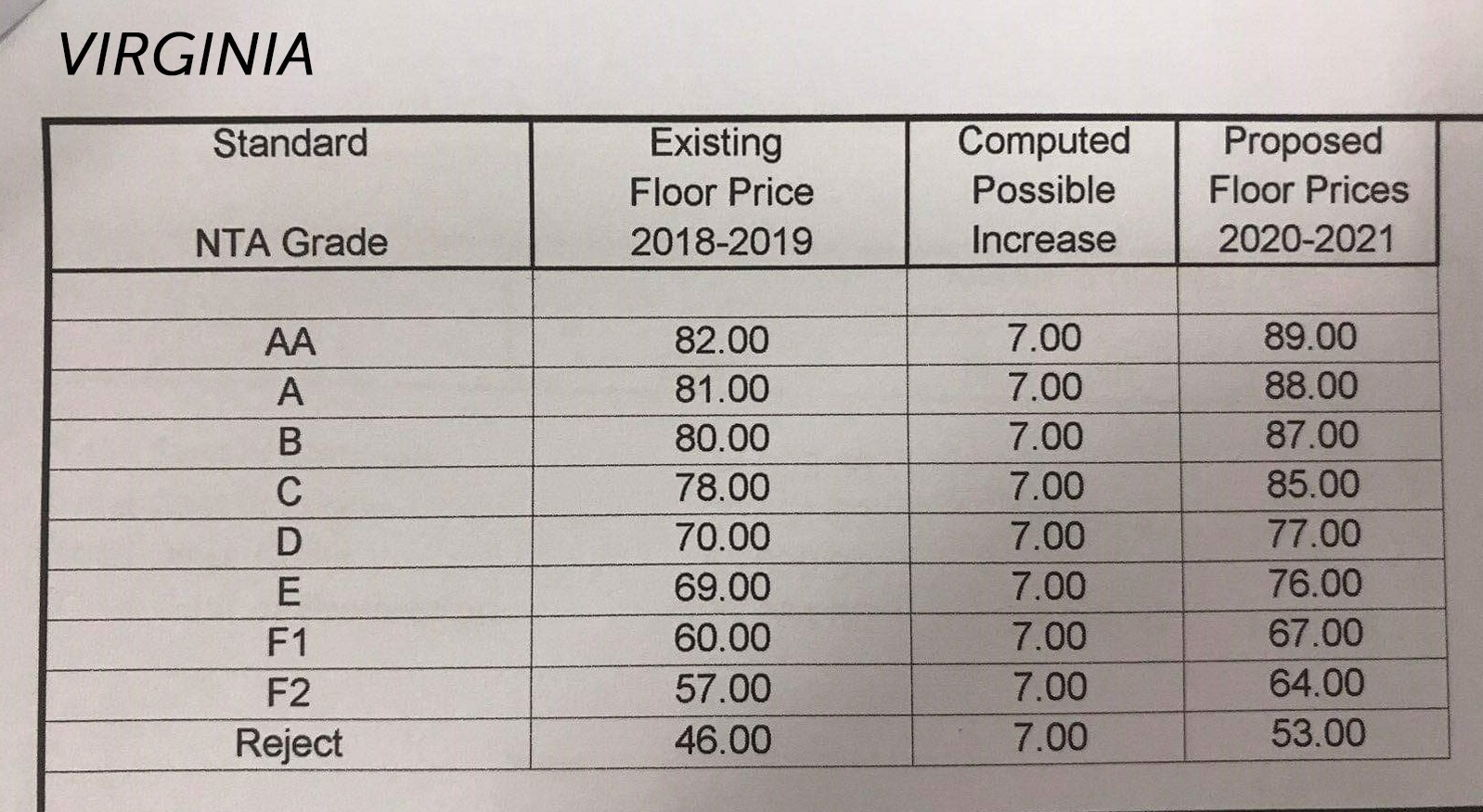 Vicente also took note of the labor cost used in the computation of production expenses.

According to him, the workshop uses the government-mandated minimum wage. However, the NTA used to give a higher value for hired laborers compared to the work contributed by the farmer’s household in the past.

“We corrected that because, in reality, the DOLE minimum wage is lower than what we give to farm laborers. Also, in our experience, paid farm help and our family does the same work and deliver the same output,” he said.

For him, what the TWG did was unfair. He stressed that farmers are the ones paying for the difference between the minimum wage and the actual labor cost.

Vicente said that based on the recent workshop of farmers, the average daily wage for farm laborers is P300. The amount does not include their expenses for snacks and lunch of the workers.

“DOLE [guidelines] only provides for the minimum pay for laborers. Traders ask how much we spend to produce our product, why do we have to put the DOLE rates when we are actually paying more for the labor?” he said.

He explained that compared in the previous years, the cost of production for this season significantly increased because of the new taxes and increased labor pay.

Despite not being part of the tripartite negotiations, Vicente said local governments could provide support by actively campaigning for the higher price of tobacco. According to him, their presence during negotiations, though in observer status, can assist them significantly in confronting the traders.

In 2007, the Provincial Government of Ilocos Sur intervened on behalf of the farmers during the negotiations. Then the governor and now First District Representative Deogracias Savellano supported the move of farmers to delay the delivery of tobacco to trading centers. He also called for a more inclusive tripartite consultation that includes representatives from tobacco-producing provinces. During the period, the increase granted for Grade AA Virginia tobacco was P10.00 and P9.50 for the other grades, the highest since the conference started. # nordis.net