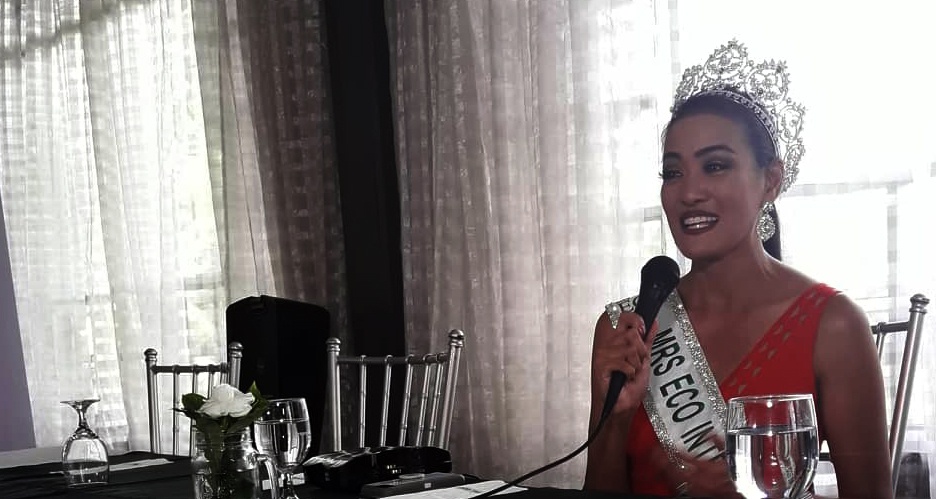 BAGUIO CITY — The first Filipina to take the crown of Mrs. Eco- International, Sheila Teodoro DeForest, urged everyone to set aside political differences and work together for the protection and conservation of the environment.

She made this appeal during a press conference on Friday, August 29, 2019, at the Hill Station at CasaVallejo here as part of her thanksgiving to the city and Benguet for their support in her bid for the crown.

“We do not have to agree on everything but when it comes to the environment we should work together because it is out only home,” DeForest said.

The 45 years old international beauty pledge to take part in the river clean up in Barangay Pacdal. She is set to join the join different government as well as non-government organizations and private individuals in planting bamboo saplings along the riverbanks and slopes to prevent soil erosions and help in filtering the air on August 31.

Deforest will also attend the parade and celebration for the 120th charter anniversary of Baguio City on September 1, 2019.

According to her, the stop of use and production of single-use plastics is her main advocacy, recalling that plastics comprised the bulk of the garbage collected in numerous beach cleanup activities she joined. She said most of these plastics are sachets of shampoos among others.

The reigning queen stressed that the government should legislate laws to prevent and penalize companies for manufacturing single-use plastics. She pointed out that stricter laws and serious implementation of existing environmental laws by government bodies and cooperation is a great help to the environment.

She said Mrs. ECO International has been rallying for sustainability and environmental awareness through education starting with the children so that they will carry it until they grow old. # nordis.net