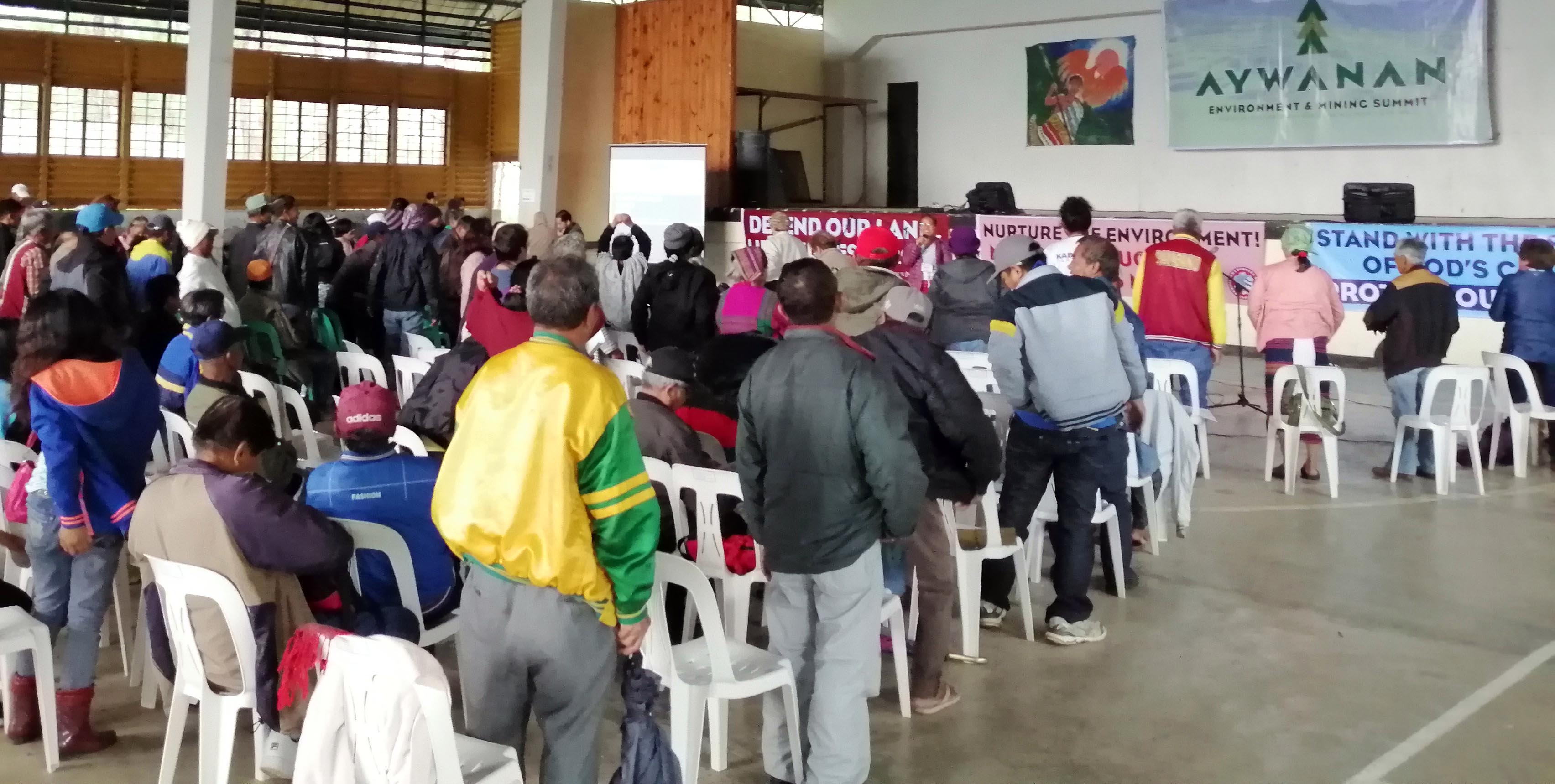 SAGADA, Mountain Province — Community representative, peoples organizations and church leaders from the Cordillera region and Ilocos Sur province unanimously approved a resolution to establish an environment and mining network to ensure the implementation of the unities formed during the Aywanan Environment and Mining Summit on August 24 in this tourist town.

Heavy rains failed to deter more than 300 individuals from attending the gathering aimed to build the broadest unity against the mining application of Cordillera Exploration Company, Inc. (CEXCI), a subsidiary of Nickel Asia Corporation. Expert speakers gave discussions on the past and present record of Nickel Asia Corporation, and information on the technical and legal matters related to mining.

Participants created a campaign plan that includes an inter-province, inter-regional petition against the application of CEXCI. The reasons cited in the document are the destructive impacts of mining on the environment, such as soil and water pollution. They noted that mining would destroy local agriculture and will displace communities and small-scale miners.

Delegates also identified the engagement of local governments to pass resolutions and ordinances against corporate mining as an essential part of the campaign. The group agreed to hold education and information drive, such as forums and community meetings in the affected villages in the coming months.

The Episcopal Diocese of Northern Luzon of the Anglican Church, the Movement for the Advancement of Inter-tribal Unity and Development, and Binnadang, the women’s organization federation in Mountain Province organized the activity.

“I believe that today’s gathering will open our minds to the truth about mining. We are fortunate that there are groups with us today that are willing to speak about the dangers of mining,” said Tomas Tawagen, the provincial indigenous peoples’ mandatory representative, in his opening message.

He said the event was appropriate to prepare the people because if mining companies were to explain their purpose, “they will surely provide deceiving explanations and sweet promises.”

“Hopefully, this activity will open the eyes and ears of our townmates who chose to play blind and deaf about the effect of mining on our land, to our territories,” he added.

Tawagen, who sits as a member of the legislative body of the province, reminded that communities should watchful of individuals posing as leaders or elders but will readily sell their lands to investors.

Reverend Father Marcial Lloyd Castañeda of the Kilong Catholic Mission saw the activity as “a big help for church leaders” to learn more about the integral connection between human rights and the environment.

He stressed the importance of being informed about the issue, so the church can “better inform and engaged parishioners.”

“I believe this [activity] if we put it in three [words], is what we call formation, transformation, and information. This is very good, and I appreciate this initiative,” he added.

In his message read by Rev. Leoba Achawon, Bishop Brent Alawas of the Episcopal Diocese of Northern Philippines (EDNP) reminded the participants that protecting and preserving nature is a collective task.

“We do not live to individually consume the resources of this earth but to contribute and collectively work together for the protection and preservation of our natural resources so others can also share in God’s bounty,” he said.

The prelate pointed out humans “misused their intelligence and power to satisfy their greed,” resulting in the “destruction and corruption” of the world.

According to him, it has become easy for people to overlook their “responsibilities as caretakers of the earth” in exchange for “monetary success and accumulation. He urged the participants “to live simple and humble lives” while protecting the environment.

“Collectively, let us all work together for the common good, putting selfish interests aside and cooperate with others for a better, peaceful world,” said Alawas.

Pulpit as a medium

“Events like this are important to teach the people of the happenings in other places, to give us information about what these companies are doing to our environment,” said Anglican priest Domingo Mayapit.

He said the best contribution priest like him could give “to use the pulpit and teach our constituents to be stewards of the environment.”

According to him, the clergy should take a more significant role “against big mining corporations who intend to destroy our environment.” He said that promoting the protection of the environment is part of promoting the Christian faith.

“I also urge the pastors, fellow priest, and church ministers to participate in gatherings like this and be part of actions to protect the environment,” he added.

“The discussion on the environment and mining is not new. This is not the first time that communities came together to talk about the issue. However, there is a certain motivation why we are here,” said Cordillera Peoples Alliance (CPA) secretary-general Sarah Dekdeken.

According to her, not a single application for financial and technical assistance agreement (FTAA) was approved in the Cordillera since the enactment of the Philippine Mining Act in March 1995. She attributed this to the “strong and united opposition of the people.”

“This is our legacy that everyone must uphold,” she said.

CEXCI have two application for mineral exploration, labeled EXPA 14 for Kalinga and Abra covering 13, 269 hectares and another 11,170 hectares under EXPA 116 for Benguet and Ilocos Sur. Its biggest application is under AFTA 08, with 43,523 hectares within the adjacent areas of Benguet, Mountain Province, and Ifugao.

FTAA is a contract for large-scale mineral exploration, development, and utilization between the government and a mining company. It allows foreign-owned companies to extract and export minerals from the Philippines. # nordis.net