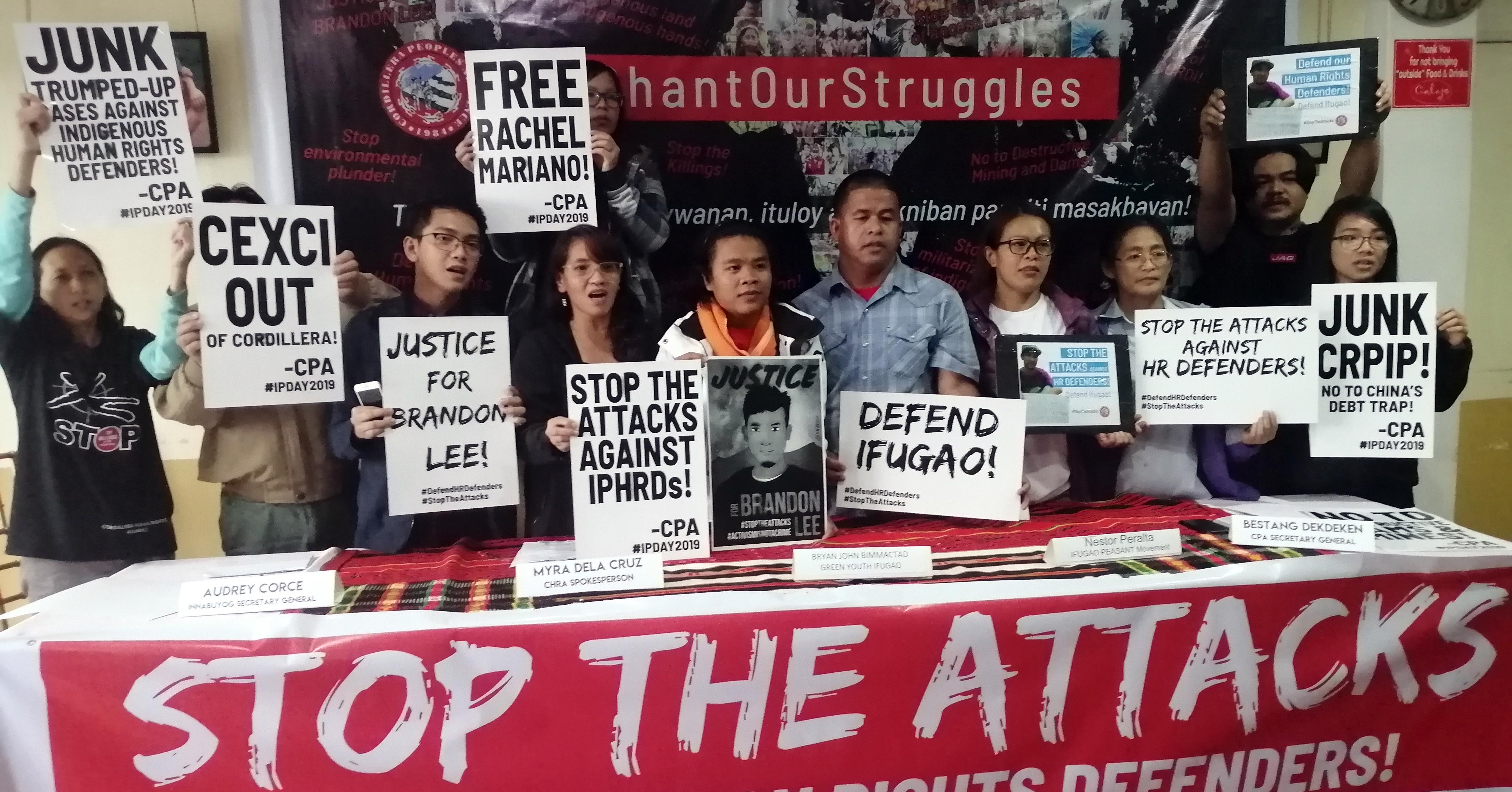 BAGUIO CITY — Indigenous groups led by the Cordillera Peoples Alliance said that the best way to commemorate the International Day of the World’s Indigenous People is to continue their defense of their ancestral domain and assertion of their rights amid the intensified attacks.

“It is ironic that as we celebrate the international indigenous peoples’ day, rights violations and attacks against rights defenders escalate. But amid these attacks, we continue to stand on the correctness and justness of our fight for the recognition of our rights, we will not cower in fear, we will prevail,” Dekdeken said.

According to her, CPA as an organization together with its leaders and members has undergone various attacks ranging from harassment, trumped-up charges, illegal arrest and detention to physical assault and murder.

She also mentioned the recent shooting against Brandon Lee, a local journalist and paralegal volunteer of the Ifugao Peasant Movement.

“We call for justice for Brandon Lee, he may be an American citizen but he chose to serve the indigenous people of Ifugao and the Cordillera by joining them in asserting and defending their rights,” she said.

In the same gathering, Nestor Peralta, of the IPM said that they never worked with the 54th IB on any program or project.

“How can we trust the military, how can the farmers partner with them they are the ones that vilify and harass us, call us rebels and kill our leaders,” he said.

According to him, many of their leaders, including him, have received death threats. They also noticed men following and watching them that they suspect as soldiers from the 54th IB.

He confirmed earlier reports on the frequent visit of soldiers from the 54th IB to office in the past months to seek partnership. They were the same soldiers who have been bugging them about the whereabouts of Lee and the activities of the organization.

“They were also asking us: where do we get our funds to operate, how much are we paid, where do we live, what time does Brandon come to the office, how many children does he have among others,” he said.

Bryan John Bimmactad of the Green Youth Ifugao also said they have not and do not plan to collaborate with the 54th IB with any activity or program.

He recalled that after the shooting of Lee, soldiers visited his house.

“They came around 7:00 PM and they talked about some sort of a partnership but when I told them I need to consult other members they said: Alam mo ba na in a few months magiging NPA ka na? How can we partner with them if this is how they see us?” he narrated.

Both leaders from Ifugao said that despite the threats and the attempt on Lee’s life, they would continue with their work, as they see nothing wrong with defending the rights of their community and other people.

Peralta reiterated that the military is responsible for the shooting of Lee and the death of William Bugatti and Ricardo Mayumi.

Gunmen murdered Bugatti in March 2014 after he came from a hearing of a political detainee in Ifugao. He was the paralegal officer of IPM during his death in 2014. Mayumi was a farmer-leader and one of the leaders that campaigned against the Quad River Hydropower Project. Suspected military agents shot him in his home in Kiangan in March 2018.

According to him, the military vilified and accused the two of being NPA members before their assassination. He pointed out that the recent attack that targeted Lee has the same pattern.

Regional women’s group Innabuyog also accused the military of harassing and tagging their members in the provinces as NPA supporters.

Audrey Corce, Innabuyog secretary general cited the case of Jona Tinong of Bidang, their provincial chapter in Abra. She said that Tinong is now the subject of threats and harassments after the 24th IB tagged her as an NPA sympathizer and recruiter.

Cordillera Human Rights Alliance spokesperson Myra dela Cruz said that the attacks perpetrated by the government are not only directed against activists. She explained that the intensified repression also targets other political dissenters and aimed at ensuring the unrestrained implementation of the programs and policies of the Duterte government. # nordis.net