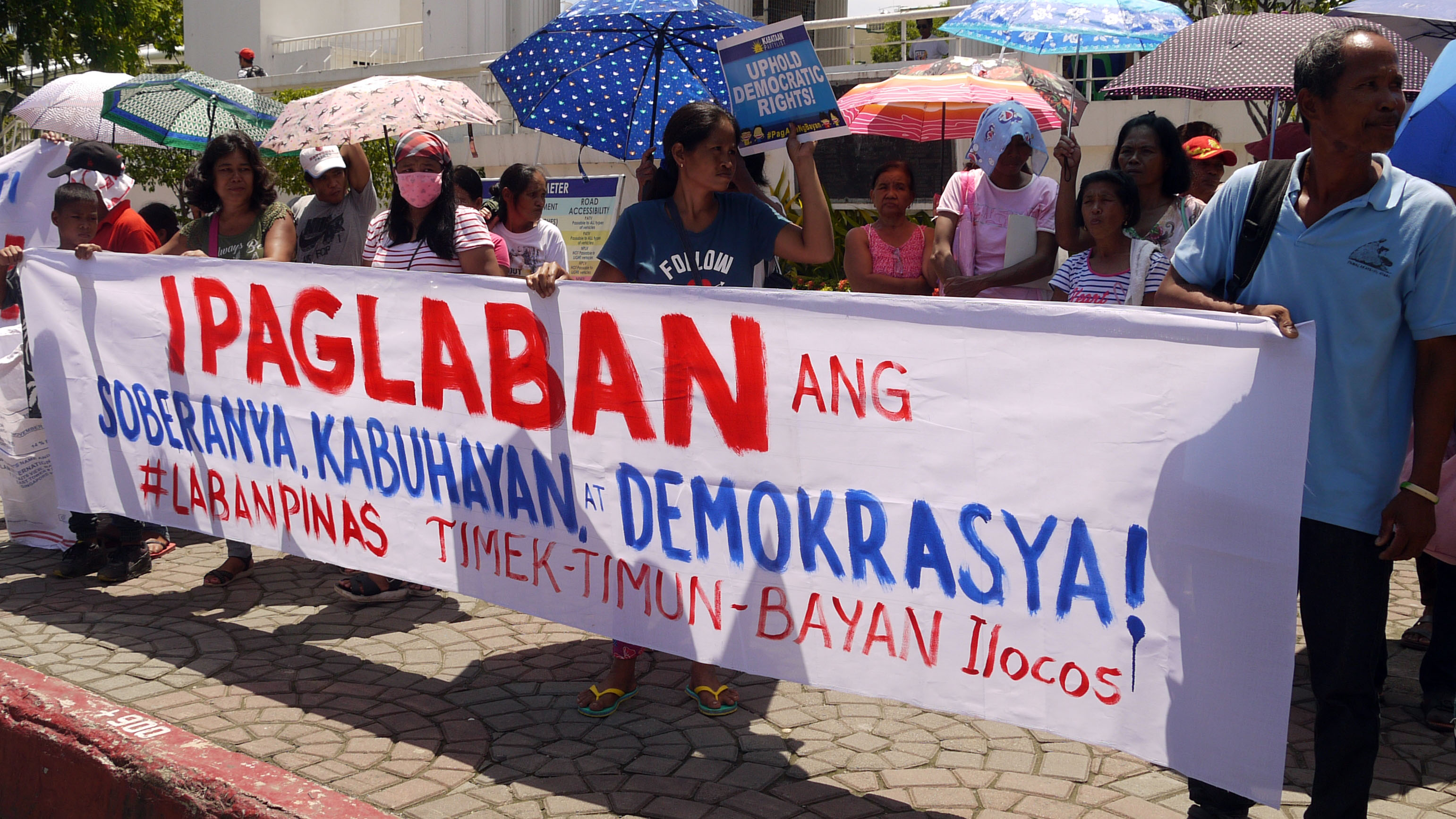 BAGUIO CITY — The assertion of sovereign rights against China’s incursion in the West Philippine Sea and “debt-trap diplomacy” bonded the different groups to hold protests in the different provincial and urban centers in Northern Luzon on July 22, in time for the 4th State of the Nation Address of President Rodrigo Duterte.

Different groups in Cagayan Valley, Ilocos, and the Cordillera echoed the growing public demand for the Duterte government to take a more aggressive stand over the West Philippine Sea. They chanted “Atin ang Pinas! China-US layas!” (Philippines is ours! China-US leave!) in their march, programs, and caravans. 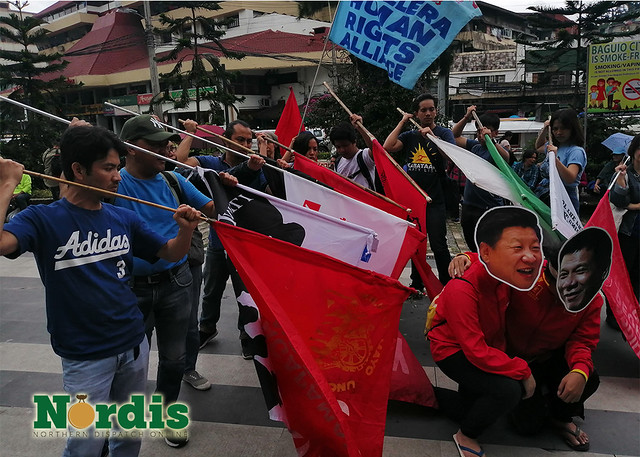 FIGHT CHINESE INCURSION. Protesters showed their anger and disgust over the pro-China stance of the Duterte administration during the United People’s SONA in Baguio City. Photo by Sherwin De Vera/Nordis

The clamor for a more assertive positioning in the West Philippine Sea further gained grounds after the government made statements favorable to China following the incident in the Recto Bank. A Chinese vessel rammed and sank a Filipino fishing boat, and left the 22 floating in the sea. Duterte also claimed of a verbal agreement with Chinese President Xi Jinping on allowing them to exploit marine resources in the area.

Former Social Welfare secretary Judy Taguiwalo explained the context of the call in a forum held in Baguio City on the same day.

“Ang China ngayon ang current talaga na nagpapalaki ng kanyang interes sa Pilipinas pero hindi rin naman natin [sinabi] na hindi na US-backed ang Duterte regime (China is currently increasing its interest in the Philippines but we are not saying that the Duterte regime is not backed by the US),” she said.

The former DSWD chief explained, “the US remains a dominant foreign power” in the country. She added that it takes advantage of the West Philippine Sea row against the Chinese government to advance its economic and military objectives in the region.

She noted the increasing aid from the US in both military and economic undertakings and underscored its support to the counter-insurgency program of the government.

Among the top concerns in the three regions in the North is the intensified attack against activists and people’s organization, and militarization of communities.

The regional chapters of Karapatan raised the systematic and widespread practice of red-tagging and harassments of activists by government institutions. They also noted the increasing number of militarized communities and members of people’s organizations forced to surrender as rebels or slapped with trumped-up charges. 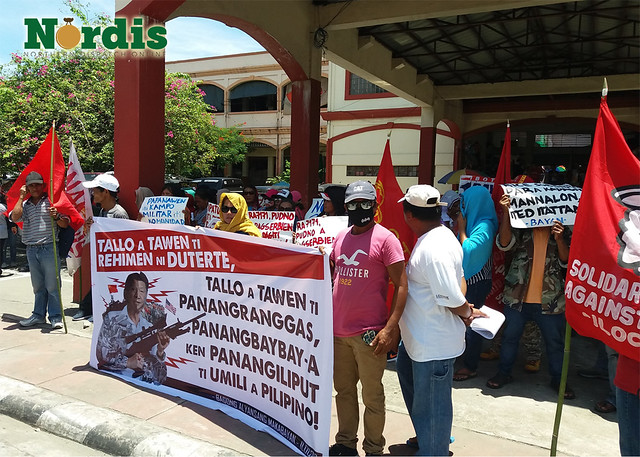 STOP THE ATTACKS. Demonstrators in Vigan City, Ilocos Sur called on the provincial leadership to act on the rising number and intensified rights violations against people’s organizations in the province under the Duterte government. Photo by Paola Expiritu

In the Cordillera, the Commission on Human Rights Regional Office confirmed that the government is conducting “education and information campaign” that intends to associate activists and organizations with communist rebels. Director Rommel Daguimol said in a gathering before the protest march that the government is utilizing instrumentalities such as the Regional Development Council (RDC) to propagate such materials and information.

The Ilocos Human Rights Alliance also cited a similar incident in their area, claiming that in one of the RDC meetings, the military showed pictures of leaders of organizations and tagged them as enemies of the people.

Military personnel from the Northern Luzon Command, particularly the 5th and 7th Infantry Divisions operates in the three regions. They are augmented by the mobile force units of the Philippine National Police and other military units such as the Marine Battalion Landing Team 8, deployed in Cagayan in February last year.

The different forms of protest highlighted specific concerns and demands of the regions.

In the Cordillera, the Cordillera Peoples Alliance (CPA) led the march from the Cathedral of the Resurrection to Baguio City’s Malcolm Square. Protesters carried with them calls to stop dam and mining projects, and onerous loans from China.

Sarah Dekdeken, secretary-general of CPA said the Duterte administration sold out the country’s patrimony by availing “fishy loans” from China, citing the Chico River Pump Irrigation Project. She added that the provision of irrigation services is not an excuse to use the country’s natural resources as collaterals nor enter into onerous loans.

“China is like a shark that preys on small fishes like us, but we should not cower in fear. Let us find strength in our unity,” Dekdeken said.

In Cagayan Valley, people’s organizations held protest caravans in the cities of Tuguegarao, Ilagan, and Santiago, and in the provinces of Nueva Vizcaya and Quirino.

The activities, led by Danggayan dagiti Mannalon ti Cagayan Valley, centered on the demand for genuine agrarian reform and protection of the environment against government and corporate plunder.

Nueva Vizcaya folk manning the barricade at the mine site of Oceana Gold Philippines, Inc. in Didipio, Kasibu town held a separate program. A passenger jeep with a public address system drove around the town airing and distributing statements for the closure of the mining operation. Samahang Pangkarapatan ng Katutubong Magsasaka at Manggagawa (Organization for the Rights of Indigenous Farmers and Workers) and the Alyansa ng Novo Vizcayano para sa Kalikasan (Alliance of Novo Vizacayano for the Environment) led the local actions in the municipality.

The demonstrators raised the lack of government support and services, especially in the agriculture sector. They also demanded additional assistance for the areas hardest hit by Super Typhoon Ompong (Mangkhut) last year and the drought that ravaged by drought. – with Kimberlie Quitasol, Paola Espiritu and Deo Montesclaros

Digong is Traitor, Enabler of the Fifth Column