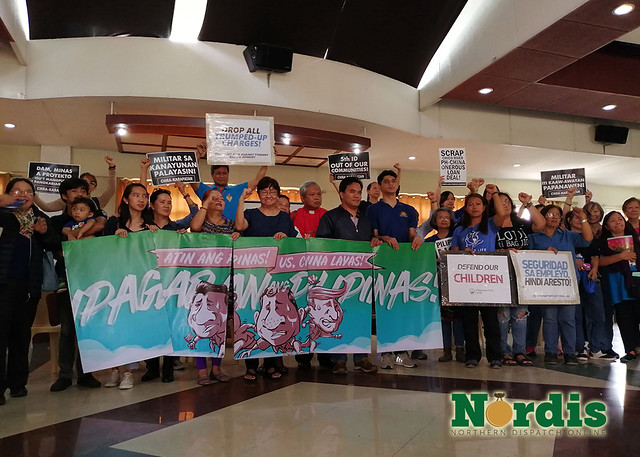 PEOPLE’S SONA. Different groups attended the forum on the true state of the nation where Prof. Judy Taguiwalo presented pressing matters that the president must address in his SONA. The discussion, organized by the Tongtongan ti Umili-Cordillera Peoples Alliance, opened the United People’s SONA in Baguio City. Photo by Sherwin De Vera

BAGUIO CITY — Issues on national sovereignty and Philippine economy highlighted the true state of the Philippine during the People’s State of the Nation Address (SONA) on July 22 here in the city.

Former Social Welfare Secretary Judy Taguiwalo, presented the factors that make these issues urgent, as President Duterte is set to deliver his SONA in the afternoon of the same day. She spoke before a crowd of 200 at the Resurrection Church.

Taguiwalo said the root cause of social problems plaguing the people is the continuing control of foreign nations and few elites in the economy and politics of the country.

Taguiwalo pointed out that developing the country’s industries remains to be the best option to address problems on unemployment and poverty.

“[Industrialization] is not happening with Build Build Build program because this is just for consumption and not for production that would benefit largely foreign funders,” she said.

Taguiwalo stressed that agriculture programs should ensure land for tillers and fishing areas for fisherfolk. She added that government programs should serve the Filipino people, not foreign interests.

Issue of the day

However, she underscored that for President Duterte’s State of the Nation Address (SONA) the main issue is the betrayal of the country’s sovereignty. The president is set to deliver his report in mid-afternoon of the same day.

“Blue is the color of the day, not red not yellow because the main issue is sovereignty, primarily on the West Philippine Sea,” she said.

According to her, the administration is allowing China to fish and exploit resources at the West Philippine Sea in exchange for loans to fund its “Build, Build, Build” program.  She added that allowing continues foreign intervention in the country’s economy is part of the sovereignty issue.

“We should build and consolidate the broadest front to fight for our sovereignty,” she said.

The position of the administration has been drawing widespread criticisms for its position, favoring China, over the exclusive rights of the Philippines in the West Philippine sea. This further escalated after its passive handling of the GenVer incident where a Chinese vessel rammed and sank a Filipino fishing boat. The Chinese left the 22 crew of the sinking boat floating in the Recto Bank area.

The Philippines in a song

Taguiwalo used these lines from the song Tatsulok (triangle) to surmise the economic and socio-political landscape of the country.

Composed and played by activist folk-rock group Buklod, the song equated Philippine society to a triangle where a handful of rich people rules over the majority. Rock star Bamboo revived the piece in 2007.

Reactors from different sectors and institutions provided local examples of the widening economic gap and policies they deem detrimental to the people. Among those highlighted were the impending demolition of urban poor communities in Baguio, the public utility vehicle modernization program and the counter-insurgency campaign that targets activists in the region. #