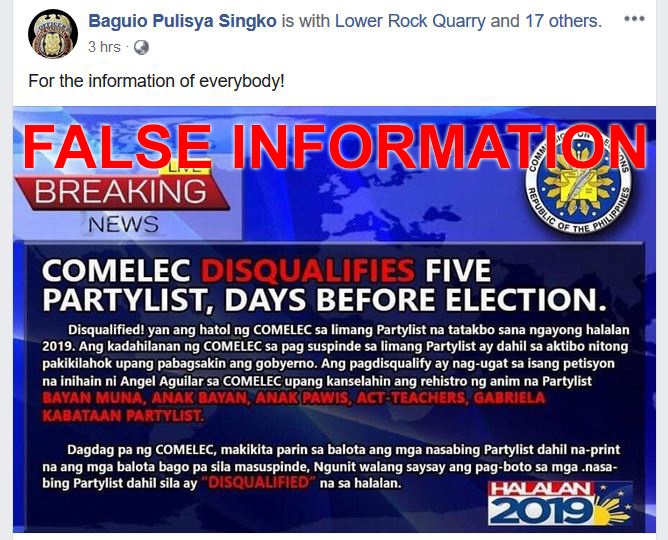 Baguio Pulisya Singko posted an image masquerading as news that said the Commission on Elections disqualified Bayan Muna, Anakpawis, Gabriela, Act Teachers and Kabataan party-lists for the 2019 elections for allegedly destabilizing the government. Tsek.ph, a collaborative fact-checking project for the Philippines’ 2019 elections by the academe and media has flagged the image as “fake news.”

The account administrator captioned the photo with the phrase: “For the information of everyone.” It also appeared in the Facebook newsfeed of the Community Relations Division of the Police Regional Office Cordillera. It is still available on both accounts as of this posting.

Makabayan Cordillera regional coordinator Windel Bolinget clarified that all disqualification reports are false and nothing but black propaganda. He also assailed the PNP Baguio for being an active purveyor of disinformation and red-tagging of activists.

In November last year, Baguio Police Chief Eliseo Tanding apologized after youth organizations lodged a complaint against them at the city council for red-tagging and connecting them to the “Red October Plot.” The post was featured on the BCPO’s social media page ‘BCPO, Kasangga Mo.’ BCPO also conducted profiling of Alliance of Concerned Teachers members in Baguio City in January.

In a related issue, the Cordillera Human Rights Alliance also slammed the Police Regional Office Cordillera for sharing online meme campaigning against its party-lists on its Facebook page.

The group said the post is a clear manifestation of “a systematic disinformation campaign and disinformation” by the government against legitimate organizations and political parties. The administrator of ‘Police Regional Office Cordillera’ shared the meme on May 7. It came from the account of KapyaKailian Montanosa, whose oldest post is dated April 1 this year. Also, the police account shared the image just two minutes after it was uploaded by the source. The post from PROCor had 16 shares while the one posted by KapyaKakailian got 65 shares.

Article XVI, Section 5, Paragraph 3 of the 1987 Constitution states that: “No member of the military shall engage, directly or indirectly, in any partisan political activity, except to vote.”

Likewise, Comelec Resolution No. 10049 issued in February 2016 prohibited partisan political activities by government employees. These include “making speeches, announcements or commentaries, or holding interviews for or against the election of any candidate or party for public office.” # nordis.net