EHEB, Tinoc – More than 200 Kalanguyas from the community of Barangay Eheb attended the Hidit which sought to unite the community after it was divided over differing opinions on the proposed Santa Clara and Quadriver mini hydro project on January 16, 2019.

Observers from the Barangays of Tukucan, Binablayan, Wangwang, Poblacion, Impugong, and Dango came to observe how to bring back community harmony. The Hidit is the Kalanguya term for reconciliation.

The Quadriver Energy Corporation, previous National Commission on Indigenous Peoples (NCIP) Ifugao and NCIP CAR staff who facilitated the Free Prior and Informed Consent (FPIC) process were invited to the Hidit to explain what had transpired previously however, they failed to show up.

Pastor Jessie Jallorina, from Eheb shared how the people of Eheb were deceived with the NCIP and Quadriver railroading the FPIC process.  Jallorina said no Memorandum Of Agreement (MOA) copy was given to the community of Eheb.

Elsa Lucanti, a municipal employee from Eheb, stated that Eheb was misled when the Quadriver Energy Corporation had asked if the people in Eheb wanted electricity and roads instead of going through the proper FPIC process.  Lucanti said the people of Eheb created and submitted several petitions to both the Quadriver Energy Corporation and the NCIP which were left unanswered.

Former Eheb Barangay Captain Teofelo Wanhay said the NCIP and Quadriver did not explain the effects of tunneling and the project’s impact on the environmental.

Atty. Macky Maderazo from the Igorota Foundation affirmed the background that was shared by the Pastor Jollorina, Lucanti, and Wanhay.  Atty Maderazo added that the cancellation of the certificate of precondition (CP) and retraction of the MOA was filed in the NCIP national legal office only to be denied further action by the NCIP.

According to Atty Maderazo, the NCIP national legal office explained that NCIP can’t take legal actions since the proponent, Quadriver Energy Corporation is not an indigenous group or person and that the IP groups should file a case through the courts.

Jallorina, Lucanti, and Wanhay shared how the energy project created disunity among the community and family members. Many directly affected land owners of the energy project were threatened as anti-development, anti-government, and as supporters of the NPA.  Farmers lost time and money through the whole process of the energy project.  The cultural value was also eroded as the bayanihan system of helping each other in the farms and labor was negatively impacted.

Atty. Atanacio Adug from the NCIP-CAR said that the CP was canceled because the Quadriver Energy Company abandoned the project and there was no accomplishment within the previous two years.  Atty Adug said the FPIC process will start back at zero and that the FPIC will be followed using the FPIC guidelines of 2012.

Leo Belingon, a professional from Tinoc said if FPIC is conducted it should be strictly followed and that all barangays and affected land owners should have their own copy of the MOA.  Belingon stated that each project should have an independent CP.

The community members in favor of the energy project apologized for the misunderstanding during the Hidit.  They said they were misled and did not fully understand the FPIC process and looked at the supposed benefits which the company promised only when they had signed the MOA with the Quadriver Energy Corporation.

Ifugao governor Pedro Mayam-o appreciated the Hidit, a part of the Kalanguya culture. “If there is unity there is progress in the community”, he stated.

After the successful hidit, the people of eheb agreed to conduct the Pekdel, a kalanguya ritual to bring unity, peace, and blessings and celebrated with an abundance of food.# nordis.net 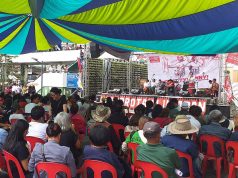 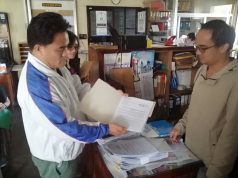 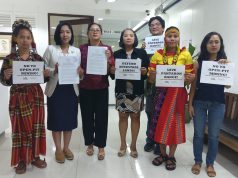