The presence of ibis birds in the rice fields can also attract tourism in their community and as a way for them to increase the consciousness of tourists on the importance of interrelation of biodiversity.

This is how they put premium on the importance and sustaining their Satoyama (landscape) as a matter of way of living in harmony with nature and added leverage to their rice production.

This is branding at its finest.

It is in this context that the local farmers dedicated some of their rice fields for the production of loach (yuyu) to feed the ibis. Farmers developed and even built a “loach route” from the small creek and rice canal to the paddies. They believe that through the route, loach from the small rivers and canals can find their way to the rice paddies. Farmers seriously conduct monitoring on the loach movement. Listening to the local story, the number of the ibis birds dwindled after the World War II due to over consumption and use of pesticides in their rice fields.

A pair of ibis were even given by China to Japan after the war. Another pair was given to improve the genetic components of the ibis. Since then, the number of ibis increased. In Awazu, ibis birds start to appear in the recent years and this condition gave a new wave of hope for the farmers.

For them, the sightings of the ibis birds in their satoyama paid off their efforts in introducing biodiversity-friendly farming as a way of living in harmony with nature.

If there is a big lesson to replicate from this practice is the appreciation of their higher level of consciousness on biodiversity. Birds are not separated from the cycle of the ecosystem. A loss of a single specie is tantamount to the imbalance of nature. Another lesson is their biodiversity-friendly farming practices where they use traditional and local plants for their fertilizer and pesticides. As the farmers keep on reiterating, all these actions are not individual, rather nature conservation is a community affair. # nordis.net 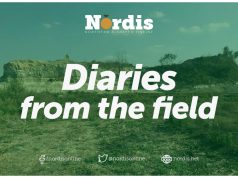